Bubble Trouble Down Under at the Star Sydney Championship

A counting error at the Star Sydney Champs in Australia has led to an angry confrontation with players at the bubble stage of the Main Event. The avoidable mistake in the AU$3,000/US$2,030 tournament came after the organisers miscounted how many players were left.

The incident began when two players were all-in during a hand that instigated the stopping of the tournament clock. The tournament director was under the impression that if both all-in players busted then he could announce that the remaining field were guaranteed a prize. This is exactly what happened - only there had been a mistake.

After announcing the bubble was over, to much applause, 20 minutes later there was another, more sheepish announcement informing the players that there were actually 64 players left, with 63 making the money. 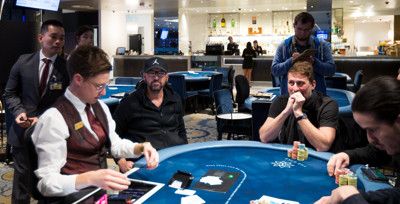 Salvatore Fazzino, the player who dipped out in the end, took to the twoplustwo forum to set the record straight. Many players made it clear this was not acceptable for such an event and eventually the director went to phone the poker room manager for some advice on how to handle the unusual situation. Surprisingly, the answer the players received was that they could email the poker operations manager on Monday to air any grievances.

This is obviously not on, and could quite easily have been solved by the organisers putting their hand in their pocket to make up the min cash for Salvatore Fazzino. Just to make the situation more surreal, Fazzino busted out with a full house losing to quads!