Global Poker’s GOAT Championship series has seen thousands of players butt heads this past week, more than SC$550,000 in $weeps Cash™ already won, and upwards of SC$400,000 still up for grabs as the Main Event looms on next weekend’s horizon.

The leading US-facing site’s SC$1million guaranteed festival has already produced a slew of winners, almost 100 winners and runners-up making it to the series-finale Tournament of Champions – a $5k live package on the line.

A close shave for The Golden Blazer

The close shave isn’t Brian’s only way of connecting with his loyal following, his daily streaming including a Golden Blazer leaderboard boasting t-shirt bounty prizes for anyone who knocks him out of a GOAT tournament.

Brian is only one among thousands of Global Poker players who will be gearing up for this weekend’s Main Event – the SC$100,000 guarantee making Sunday 18th August a must-play day on the calendar.

For those who have already won a GOAT title, there is extra $weeps Cash™ - Global Poker’s innovative real-money currency - available in the Hometown Heroes social media campaign.

The Champions Packs contain GP merchandise as well as the winner’s trophy and those who pose in their newly-acquired gear at a local landmark or hometown sign can win even more $weeps Cash™.

It’s still a little ways off yet, but the Tournament of Champions event on Sunday 25th August will bring together all those who have made the top two in the GOAT championship events so far. 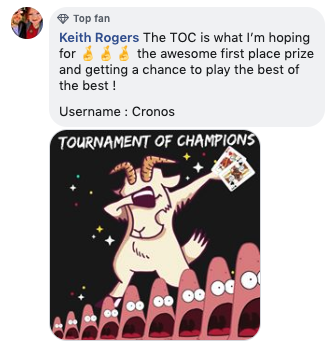 Then it’s a battle for the prizes, the top award being a live tournament package worth $5000, previous TofC winners taking their A-game to Vegas and beyond, with plenty of success.

As a community-focused site, naturally there is a play-money version of the GOAT series taking place, with more than 1million of the unique Gold Coins handed over, and it’s only week two – so much more to come.

So, another week and more of the GOAT to go, and if you fancy getting yourself in the mix, head over to Global Poker to register for free – and you can even keep your hair if you want!