Swedish online pro Fredrik 'jamaica_111' Björklund has been accused of scamming a fellow pro out of a $5200 WCOOP Main Event buy-in and more, and then becoming rude and abusive when asked to repay his debts.

The story came to light after a friend of Belgian pro Michiel Easterdamz van Elsacker shared a satirically-written ‘Beginners Guide to Scamming’ on the 2plus2 poker forum.

Björklund is named as the person who first approached van Elsacker to buy a share of the latter’s $5200 WCOOP buy-in last year, with % swaps on extra bullets also agreed according to other reports.

Despite not knowing Björklund, van Elsacker was aware of his poker reputation – the Swede boasting $654,781 in total online winnings according to PocketFives.com.

“I’ve never had problems with swaps before.” He added: “I knew it was a small risk, but you don’t always have a chance to really check things out”, revealing a busy playing and TwitchTV streaming schedule during the WCOOP.

The deal with Björklund would soon turn sour, however, as the Swede refused to pay up his share after the event – and then resorted to insults in private messages, one of which was shared in the 2plus2 thread. 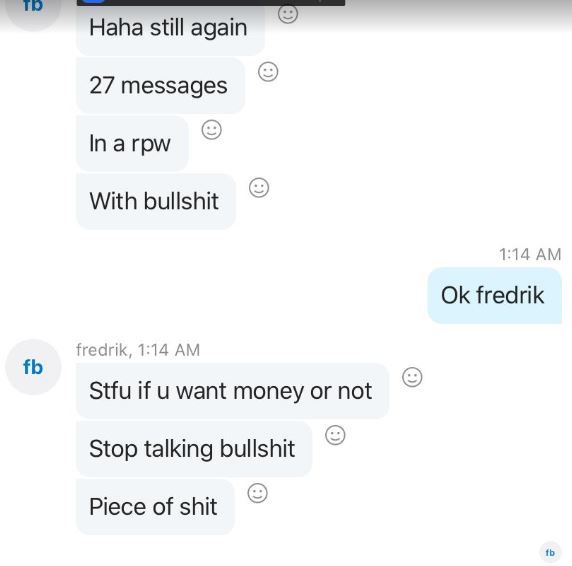 It appears that it is not only poker players that Björklund has been trying to scam money from.

A FB post from last year and shared below reads:

“Warning of this person who tried to cheat … many people out of money. Tried to get people mostly women to lend money, stand on loan etc etc. He has now blocked me.”

…with one of the replies stating:

“He was asking me for money a few years ago. He said I'd get it "double" the day after. But never lent.”

PokerTube has also unearthed Swedish court records from 2019 that appear to show Björklund borrowed more than $200,000 in total from two different women, which he was ordered to repay, along with court costs and interest.

If the allegations about Björklund are true, he joins a long list of scammers in the poker world.

In addition to these $multi-million scams and the various pitfalls players should try to avoid, we reported last week on the latest Nicky Palma scam.

This came to light after Chicago pro Ralph Massey asked his Twitter fans what he should do after friends were cheated out of money by Palma.

Other pros who have been outed for their dishonest ways include David 'Chino' Rheem, Maurice Hawkins and Eli Elezra.

The latter saw sales of his book ruined by news that he still owed more than $1million to various players years later, making little or no attempt to pay.