Is This an Angle Shoot? Jim Carroll Card Peeking

We all know poker involves deception, pretending to have a strong hand when we really don’t, or acting weak when we’re sitting on a monster, but where do we draw the line between ‘ethical’ plays in poker and those which are not? Gamesmanship, angle-shooting and downright cheating –the line is often blurred, so have a look at the following and tell me what you would class it as.

Jim Carroll is a Texan poker pro – and a bit of a weirdo if truth be told – who uses a particular method of play which is designed to confuse and/or ‘cheat’ the opposition depending on your view. Here’s what he does…

When the dealer sends a card his way he sneaks a quick peak at it while no-one is paying attention. If it’s a decent card (say an ace of a king, though sometimes not) he waits for his 2nd card and immediately ‘caps’ the pair of cards with chips, loudly announcing he is ‘playing blind’.

Now, what advantage is he expecting to gain from this? Well, if you haven’t looked then you are basically playing ‘any 2 cards’ – and the opposition, if they know or think this, will feel that they can take advantage of this.

It is general considered that Q7 is the ‘average’ hand in poker, so any range of cards better than this has a positive expected value against ‘any 2 cards’. Say you have K9. Against the average Q7 you are a 65/35 favourite, so it would make sense to play this hand against Carroll or anyone who is ‘playing blind’ – even if you might not usually play K9 after a raise or whatever.

Of course, WE now know that Carroll is not playing blind at all! He basically lied to the table, and on multiple occasions, in his Poker Night in America appearance. Let’s say he announced ‘I’m playing blind’ with any ace as his first card. How would this affect your % if you had K9 (just as an example)? 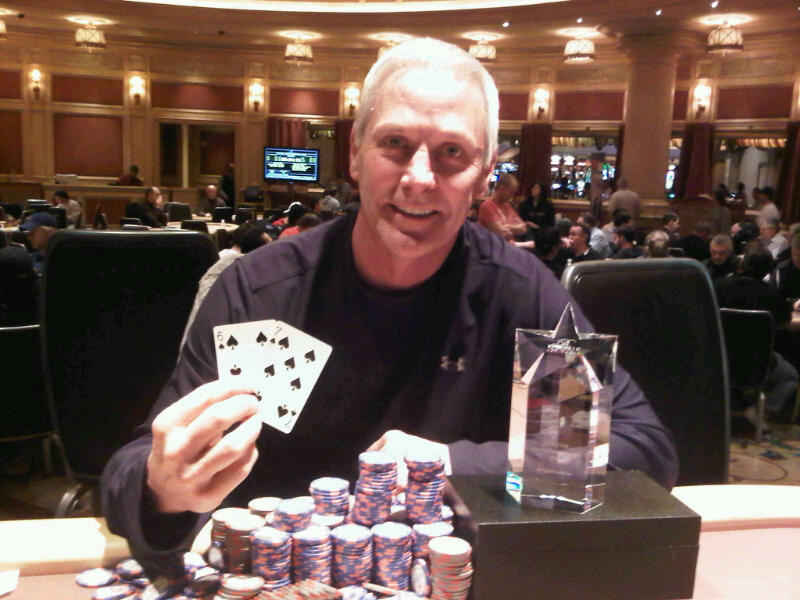 So, is this angle-shooting? Is this a case of deliberately misleading the table in a way which the game wasn’t designed to be allow? I certainly think so, and so does Doug ‘WCGRider’ Polk, the online and live poker wizard who talked about the incidents on his recent ‘Polker News’.

It’s extremely misleading…he’s running a really shitty angle…to gain an unfair advantage”, Polk emphasising the term unfair advantage. “Angle-shooting should not be allowed, because…it opens up the doors for the game of poker not to be played by the rules itself.”

Polk adds a few other examples of angles being run, and of the Carroll ‘play’ he says:

Not everyone agrees, however, with many posters seeing no difference between this and, say, Tony G’s ‘I haven’t looked at my cards’ lie against Phil Hellmuth.

Parallels have also been made with other incidents or actions in poker. For example, many think that poker is a game of ‘disinformation’ – making your opponent believe you have a weaker or stronger hand than you’re representing by bet sizes, table-talk, whatever. What makes Carrol’s actions an ‘angle-shoot’ rather than a legitimate form of disinformation?

On 2+2 where posters are discussing this very issue, ‘Cooozy’ gives the best description of the difference I have seen.

There's a difference between deception that's an intended dynamic of the game, and deception that's unintended and disadvantages others,” he states, adding, “If I bet big with air, or verbally tell my opponent he should fold when I know he shouldn't, that's how the game was intended to function as thus is ok.”

He gives a clear example of ‘unfair deception’:

…if I say call but purposefully put in a raise (knowing it will count as a raise but make me look weaker than if I raised normally). Clearly the game is designed so that you're supposed to know if your opponent meant to raise or call, and by doing this you give yourself an advantage, so this type of deception is cheating.”

He ends by saying:

It's clear the game is intended to function with players only knowing their own hole cards. By simply not looking at your own hole cards, you're going against the way the game was intended to be played, but that's okay because it puts you at a massive disadvantage so nobody is going to complain (it can't be cheating if you're doing something that you know can only disadvantage you). But by saying you haven't looked at your cards when you have, you're now advantaging yourself as well as playing the way the game isn't designed to function, so that's cheating.”

I happen to agree with this entirely, but perhaps it’s a minority viewpoint? Which wouldn’t make it wrong, of course, just not popular!

Last year I wrote about the ‘top angle shoots in poker’ and here’s a quick summary of various angles and the case for the defence.

The case for the defence: Poker is a game where you are supposed to mislead your opponents! On this simple point, the defence rests its case.

The case for the defence: The defence will not be calling any witnesses – the player (Daniel Negreanu of all people!) revealed that it was indeed an angle-shoot and that it was his opponent’s responsibility to decide whether he was being truthful at the table or not!

The case for the defence: The player (Daniel ‘Jungleman’ Cates) was in 1st position – it’s an awkward spot at the table for following the action. Added to this, the table-talk was generally loud and loose, so making a mistake and playing out-of-turn will inevitably happen on occasion.

The case for the defence: The player (Ivan Freitez) made an unfortunate mistake because of his poor command of English. However, it transpired that he had pulled the same stunt several times and knew exactly what he was doing!

So, there are many, many ways to angle-shoot in poker – should Carroll’s be included in that list? Let us know in the comments section below!