It didn’t take long for poker’s most opinionated and high-profile pro to get himself involved, Daniel Negreanu today tweeting his ‘horror’ at the one-round penalty handed out to William Kassouf at the WSOP for his table-talk ‘taunting’.

Just saw the penalty against Will Kassouf. Absolutely horrified by the unjust ruling of a one round penalty. So many things wrong with it.

As I wrote, Englishman Kassouf was centre-stage in episode 4 of ESPN’s coverage of the Main Event, the summer tournament only a month away from its final table ‘November Nine’.

Kassouf’s antics at the table are legendary, and his appearance on the TV this time round showed that he’d been honing his ‘titling’ approach to poker even further.

His constant chatter and gamesmanship left fellow player Stacy Matuson visibly unsettled as she had to decide whether to call Kassouf’s bet for her tournament life – as did the calling of the clock by a fellow player, fed up with the Londoner’s annoying talk and Matuson’s inability to make a decision.

When told by first the dealer, then by a floor manager, that his talk amounted to ‘influencing the action’, Tournament Director Jack Effel then got in on the action, warning Kassouf that he wasn’t to speak again until the hand ended. This, according to some of Negreanu, was out of order…

@dontsayshipit he has ZERO RIGHT to tell him he can not talk. ZERO. He can't say "I like peanut butter" because floor doesn't like it?

Others, however, disagreed with Negreanu completely, Ryan Feldman tweeting:

"He was angling, despite being told multiple times not to. He broke the rules and was being an ass. Easy penalty.”

RealKidPoker Where is the line Daniel, at what point does Kassouf get his fucking lights punched out? International TrashTalk (tm) rules?

Which was followed by:

"Kassouf's antics are OK? You really want to spend days in a tournament with random shitheads constantly running their mouths?”

Kassouf as we know WAS penalised by Effel, ostensibly for ‘taunting’ his opponent, and threatened with further penalties if he didn’t shut up - which he reluctantly did.

Negreanu, however, had already moved on to the actions of Matuson, stating:

I thought Stacy Maduson's post hand behavior towards the clock caller was infinitely worse than the behavior of Kassouf. 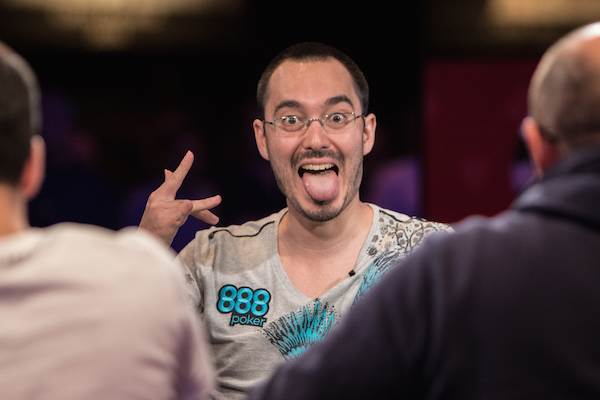 To be fair to Negreanu, having watched it myself, Matuson was indeed out of order to harp on for so long about the clock-calling – but it was no match for Kassouf’s nonsense.

Daniel doesn’t give much time for conversation though, as he was off-and-running on yet another tweet:

Will be taping a Full Contact Poker Podcast tomorrow discussing the Kassouf penalty, HOF, and an awesome guest. Should be a good one!

Perhaps Daniel doesn’t realise that although he himself likes to talk a lot at the table, he isn’t the incessant sort of ‘verbal diarrhea’ talker that Kassouf is! It would be interesting to have a vote on whether Kassouf is the most irritating and deserving of a penalty player in modern poker?