He may be a multi-millionaire popstar, but it seems that the high-profile and high-stakes games in poker just aren’t for Justin Bieber, as he was spotted yesterday at the £1-2 cash tables in London’s Empire Casino!

Although he is renting a huge mansion for his ‘Purpose’ tour in the UK – and paying £108,333 per month for the privilege - Bieber decided to relax after sell-out gigs at the O2 arena by mixing with the regulars in the popular Leicester Square cardroom. 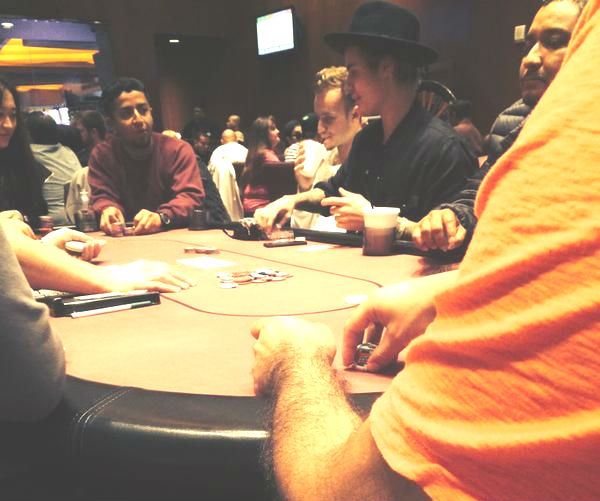 "He was playing with normal members of the public,” said one unnamed 26 year old fellow player, who added: “The game had an average buy in of £200 roughly, but not sure how much he won or lost to be honest. He was quiet in general and kept himself to himself.”

Dressed in his trademark ‘streetwear' – a maroon hoodie, ripped jeans and grey beanie hat – Bieber looked no different from the average 22-year old poker player, but his $200+ million fortune (growing at a reputed $50million a year from record sales, tours and endorsements) could likely have bought out the casino if he wanted to!

It’s not the first time Bieber has shown an interest in poker, though, the star posting on a pic Instagram late last year of a home game on a yacht moored at Newport Beach, CA – the stakes this time being a mighty stack of Sour Patch Kids candy!

It seems as though poker is Bieber’s favorite way to relax, appearing with his best pal Ryan Butler at the Morongo Casino & Resort in Cabazon, California last year as well and just this summer he was spotted at the Borgata, his entourage surrounding his table as he again played for ordinary stakes against ordinary poker players – fans and gawking onlookers prevented by bodyguards from getting decent pics of the young star as he changed shirts at the table! 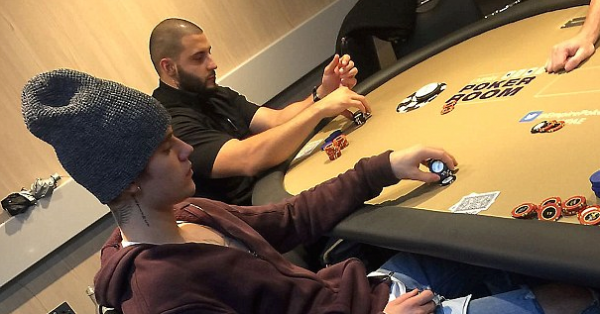 London fans of the game and of Bieber may be seeing much more of Bieber – who found fame at the age of 13 after posting YouTube videos of his singing and being tracked down by a record producer. He will apparently be dividing his time between his LA home and London mansion until the end of the year.

Bieber isn’t the first pop sensation to be hooked by the game. Back in 2012 Madonna joined a star-studded line-up for the Shane Warne Foundation, putting up $10,000 to play in the poker tournament for the charitable foundation.

Boyzone’s Shane Lynch was even more successful at the game, being signed by Ladbrokes and representing them at the World Series of Poker among other events. Apparently even Lady Gaga – queen of the hit song ‘Poker Face’ has tried her hand at the game, although her results didn’t really merit a mention! Still, with stars of the pop industry getting involved in the game it can only be good for poker’s public profile.