The debut of the newly launched Midway Poker Tour, with an event near Chicago’s O’Hare International Airport, has resulted in allegations of fraudulent and overvalued merchandise payouts being forced upon players who cashed in the tour’s initial $1,100-buyin event.

The disputed payouts came in the form of silver and gold bullion forced upon each of the 31 players who cashed in the tournament. Unknown to participating players before the event -- at least to those who traveled to play at the suburban hotel venue where the tournament was held -- was that the event was being conducted under Illinois’ charitable-gambling statutes rather than a standard casino-gambling license.

The difference is significant. Gambling events are legally held in Illinois under those statutes, which normally help licensed charities generate needed funds. However, under Illinois law, players can receive as a cash payout no more than $500 over their initial buy-in -- here, the $1,100 entry fee.

Players who cashed were thus able to be paid only $1,600 in cash, while even a min-cash was worth $2,300. To make up the difference, as posted by several participants on social media and on poker forums, Midway Poker Tour personnel gave players the difference in silver or gold bullion and claimed an inflated value for the coins. Multiple players reported being given one-ounce coins (called “rounds” in the precious-metals world), and being told they were worth $35. The affected players then discovered that the “spot price” for silver bullion -- in essence, what a one-ounce piece could be sold for -- was less than $25 instead of the $35 as claimed.

The difference in actual versus claimed value became more pronounced as the final day progressed and the payouts climbed. The situation became so controversial that the final 10 players called a halt to discuss the situation, though they eventually agreed to continue play. The situation was further complicated by the fact that Illinois charitable-gaming regulators visited the venue, a Sheraton hotel in suburban Elk Grove Village, at least twice, likely to determine if the event indeed had proper permits to be held.

First prize in the event was scheduled to be $55,065, meaning that an inflated valuation of the precious metals given to the winner might cause an impact of more than $10,000. Lombard, IL’s Renato Spahiu won the event late Sunday night. 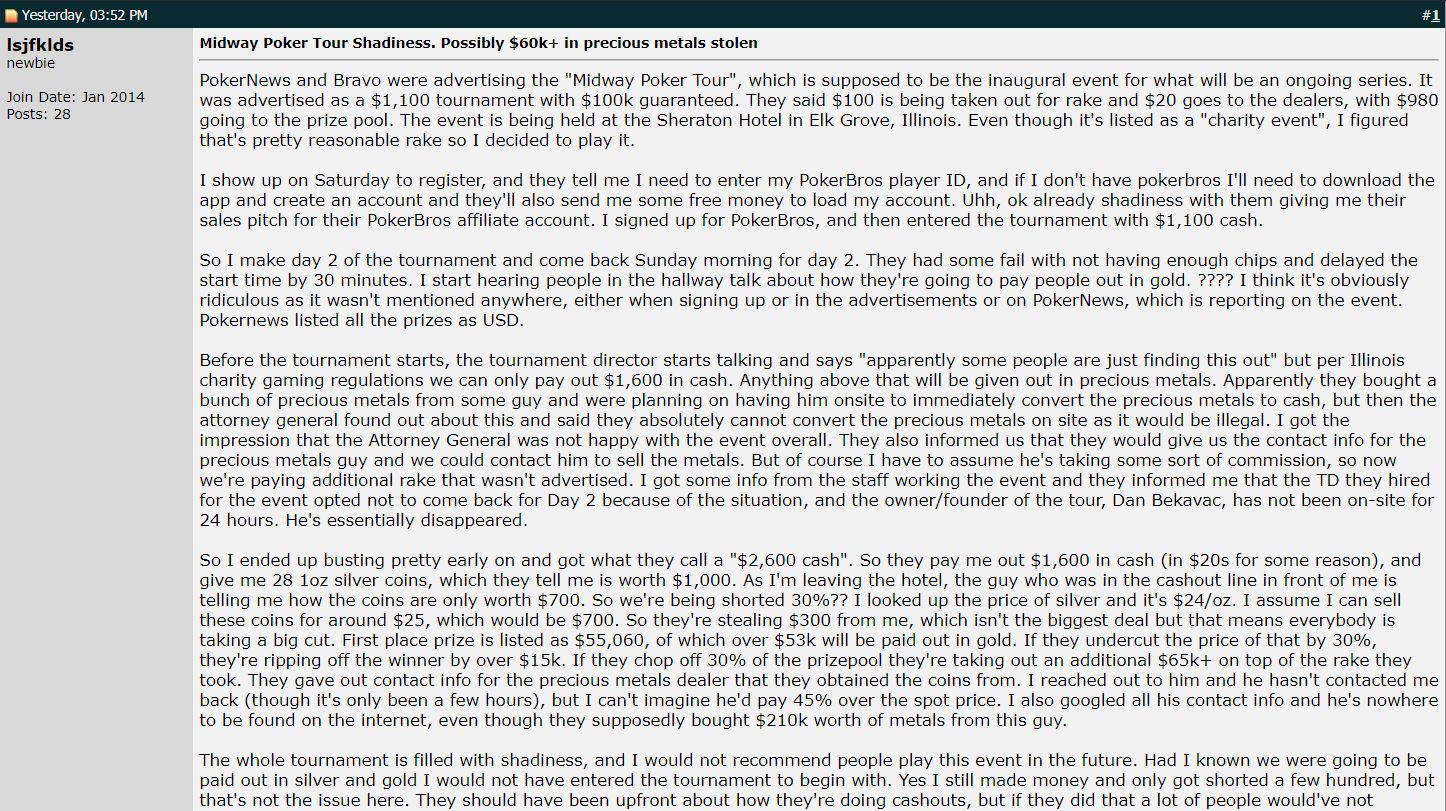 The tour’s founder and organizer, Daniel Bekavac, of Bolingbrook, IL, was also reportedly not at the tournament on its final day. The scene grew stranger when its lead tournament director, Jeremy Smith, was also a no-show for the final day. Widespread speculation indicates that Smith, well-known from his years with the Heartland Poker Tour, was likely unaware of the situation regarding the payouts until late the previous day and likely extricated himself from the pending implosion.

While the tournament may have been properly licensed under Illinois regulations, no evidence exists online that it was properly advertised as a charity-themed event where the special payout rules are mandated. While in-state players could be expected to have some knowledge of the state’s gambling laws, numerous players traveled from other states to participate.

The Midway Poker Tour’s website also claims a partnership with Bolingbrook-based 4 K.I.D.S. Sake, a charity benefiting needy children that will now fall under a regulatory microscope. Under Illinois charity-gambling laws, three separate gaming approvals are needed, one each for the venue, the sponsoring charity, and the gaming-services provider.

Unverified claims posted on poker forums and social media suggest that the gold and silver bullion used for the payouts might itself be counterfeit. However, no solid evidence for those claims has emerged, though such ripoffs do indeed exist. More likely is a scenario where MPT founder Bekavac sought and obtained licensing without actually understanding the requirements of Illinois gambling law, then scrambled to find a way to do legal payouts for an event with a quarter-million-dollar prize pool. The inflated value of the bullion payouts are then likely to be claimed by impacted players as Bekavac trying illegitimately to recoup his losses in running the event.

On Sunday evening, Bekavac issued a statement to PokerNews’ Chad Holloway, who was present at the event. Bekavac blamed the situation on Illinois’ gaming regulators refusing to allow Bekavac to have a gold dealer at the venue to quickly convert the bullion into cash. Bekavac’s claim seems unwarranted, since the regulators are tasked with enforcing the law, not assisting people with workarounds of the laws they’re designated to enforce.

PokerTube will return to this story as it develops.

How to Play Poker Online in IndonesiaPromos