PokerStars recently announced that their new game Power Up will soon be released for U.K. players to enjoy, with the international market to follow soon after. The news comes after several stages of testing and development. Power Up’s unusual mix of poker and special powers has seen the game branded as similar to eSports.

For those who are unfamiliar with the game, Power Up uses the standard Texas Hold ‘em rules. The player is dealt two hole cards and there are three streets of betting. The same hand rankings also apply. But that’s where the similarities end between a regular poker tournament and the gameplay of Power Up.

There are nine distinct powers in PokerStars’ new game, and each lets you manipulate the cards and the outcomes in a unique way, adding new layers of strategy to what is already a very strategic game. The power-ups allow players to take actions such as forcing opponents to expose hole cards (X-Ray), destroying a card from the current street of play (Disintegrate), and redrawing new hole cards (Reload). Players also start each hand with a set amount of “energy” and each power requires a certain amount of energy in order to use, with the stronger powers requiring more. 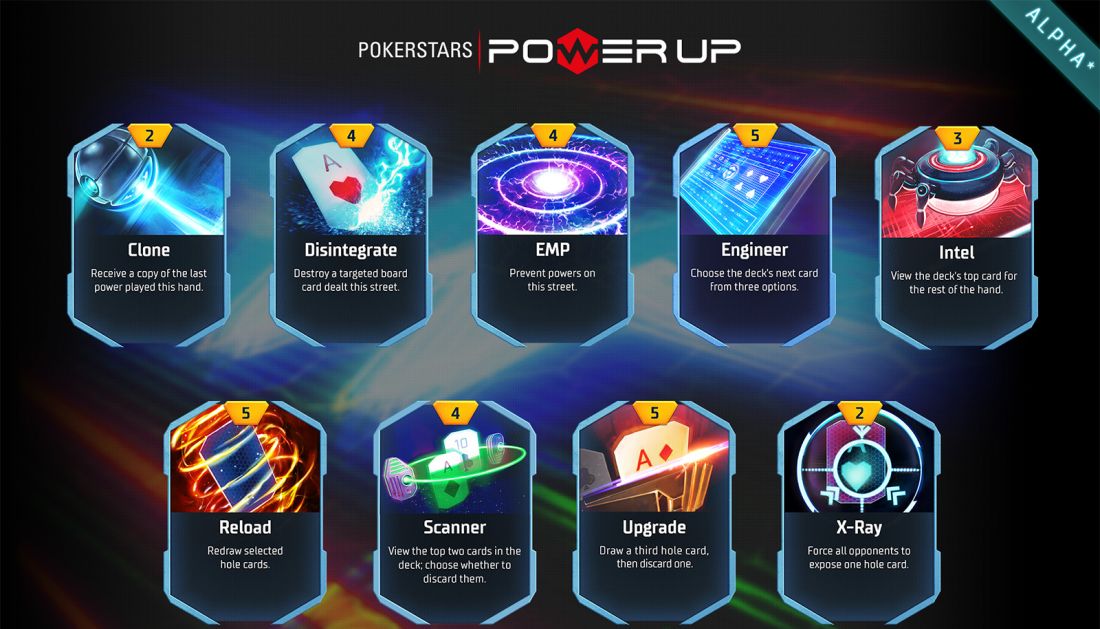 The development of Power Up began back in March 2014, with PokerStars collaborating with teams from the video gaming industry in order to make it happen. It wasn’t until February 2017, however, that Power Up went public. At that time, the game entered a closed alpha phase of testing to a limited number of people for play money.

After tweaking the performance and features, Power Up re-emerged in August for the second phase of alpha testing and then disappeared again just as abruptly two weeks later. During this time, PokerStars reported that 150,000 games were played by 90,000 people. More hype was generated as people discussed the game on forums and in blog posts.

According to a statement:

“PokerStars will look to make refinements before releasing the final version towards the close of 2017”.

The current format sees players start with 10 energy points, with two points added at the start of every hand. There will be seven hands per blind level and players will start with 2,500 chips. Players will also have to wait until the final release to see what changes PokerStars will make following the testing.

The game is expected to add extra excitement value and draw in a new generation of players. The power-up features have been compared to games like Hearthstone and the new dynamics are sure to introduce novel and challenging situations and strategical opportunities for players. For example, certain power-ups will be more useful in certain scenarios; although players will have to save and manage their “energy”, and specific combinations of powers will yield the most effective results.

Power Up will not only be an addition to poker but will also come across like a whole new game. With Power Up, PokerStars has developed a new game engine built into the client specifically for their latest edition, and the game is brimming with new sounds, animations, themes, and avatars. The anticipation and excitement continue to build…

How to Move Your Poker and Casino Bankroll from One Website to Another? Find Out Here!

If you are an inexperienced and aspiring gambler who wants to explore the realm of online casinos, you should know that not all games are good for beginners

Are you looking for a good online casino operator?

The World Poker Tour To Give Out Private Jet RidesBusiness & Industry