Hopes for a rapid and widespread reopening of US-based poker rooms and casinos in the United States have received a setback after a semi-private poker room in Texas and two casinos in Oklahoma announced a re-closing of their facilities after positive COVID-19 tests for people who were recently present at their respective venues.

The Texas COVID-19 case involves The House Club Poker Room & Lounge, a semi-private club operating in Edinburg, a suburb of McAllen, near the Mexico border. The smallish club generated global poker headlines in mid-May by becoming one of the first US live poker providers of any type to announce its reopening plans after shutting its doors in March. The club also posted pictures of its custom plexiglas “sneeze guard” seat dividers that it hoped would reduce transmission of the coronavirus to an acceptable level.

However, those hopes were dashed with a June 21 announcement that a customer who played poker at all three of the club’s tables on a single day last week had tested positive for the virus. Late Sunday, the club announced that it was reclosing to do a deep clean of its gambling area.

"A new member visited our club in Edinburg," the venue posted on its Facebook account. "The person sat down at our tournament tables as well as our cash table.  This person has been tested positive for COVID-19. The member acted fast and notified us."

Contacting all players and employees that day was only possible because, as a private club, it had daily records for all playing customers. The room also informed the public that everyone present that day was wearing masks, per county order, in contrast with earlier days after the club’s initial May 18 showing a majority of the players without masks (photo). 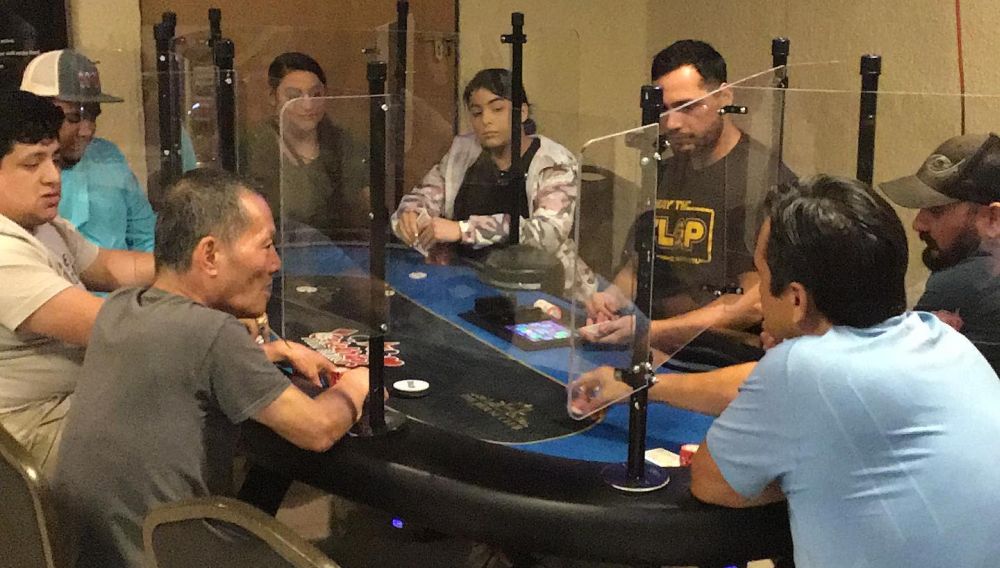 The club promised a 7-10 day closure for the deep cleaning to sterilize all possibly contaminated surfaces, including poker chips. However, such a cleaning would have little effect on any player who spread airborne viruses to others present nearby in the same close space. Texas in general has been one of the states suffering a serious resurgence of new COVID-19 cases after its governor rushed to do a general reopening of the state last month.

In nearby Oklahoma, a different story played out. On Tuesday, the tribal Sac & Fox Nation announced that the Black Hawk Casino in Shawnee and the Sac and Fox Casino in Stroud would be closed “until further notice.”

As reported by Oklahoma news outlets, the tribal operator received news of an employee testing positive for COVID-19, then choosing to close both sites out of an “abundance of caution.”

The two Sac & Fox casinos are about 40 miles apart, less than an hour east of the state’s capitol, Oklahoma City. Both venues will undergo a deep cleaning. No reopening date has yet been announced.