The Twitch streaming platform has been hacked and the earnings of thousands of streamers have been published online. The Amazon-owned website is a major success story in the gaming world but was apparently targeted because of its community being “a disgusting toxic cesspool”. 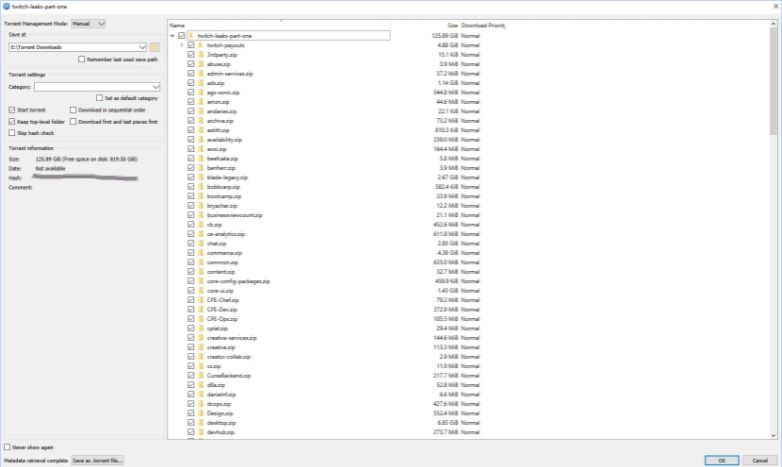 The data which was stolen amounted to a 125GB file posted on the 4Chan message board, and it included a lot of surprising numbers. It was also labeled as part one, meaning that there could be a lot more to come.

The payout reports listed, go back as far as 2019 and include encrypted passwords for many accounts.

Already this year the platform has paid out $889 million to its partners. Up from $517 million during the same period last year. According to the Wall Street Journal the top 1% of earners banked more than half of the entire revenue stream. At the other end of the scale, the bottom 75% of earners can’t even scrape more than $120 per month together.

Despite some streamers earning outrageous sums of money from Twitch advertising, only 81 of them have been paid in excess of $1 million since August 2019. This is surprising, considering what many YouTubers earn. It’s worth mentioning that many streamers duplicate their Twitch content over on YouTube, giving them a tidy boost.

How Much Do Poker Streamers Earn?

It didn’t take long before a member of the 2+2 forum downloaded the data and made a table showing how much poker streamers were earning.

Lex Veldhuis was up top having earned $294,298.16. Maybe surprisingly, he also sits in 558th place out of all streamers. Given the meteoric rise of esports over the last couple of years, we didn’t expect a poker player to be up so high in the rankings, but it’s great to see.

In second place was “True Geordie” with a grand total of $235,118.07. Real name Brian Davis, he is known for streaming mainly sports content, with an emphasis on football and fighting sports. He is also a friend of Charlie Carrel and has started streaming poker home games over the last year, and appears to be doing well for a non-professional player.

Ben Spragg, the Staples brothers and Jeff Gross also appear, but none are making as much as many expected given their popularity in the game.

Jungleman doesn’t do things by half and when he decided to challenge two of the WSOP’s greatest legends to a “street fight”, he didn’t mince his words

You might not have heard about Dan Schorr, a former prosecutor who worked in New York and a TV legal analyst, but you might be interested in his debut novel

Doug Polk has clashed with Ike Haxton on Twitter, accusing him of always taking a disagreeable attitude with him because of an old feud with Ben Tollerene

The Rise and Fall of Dan BilzerianPoker Gossip & Opinion