An anonymous poster on the 2plus2 poker forums has revealed how teams of cheats are targeting Heads-up SNG tournaments on major poker sites, using two computers to avoid bot detection efforts.

Known only as godmode49, the whistleblower’s video revealed not only the techniques being used, but also names and online chats with the bot cheat gangs, which he claims originate in Bulgaria.

The teams target high stakes HUSNG tournaments across numerous sites. This form of play has been essentially solved by computers, which allows the scammers to play as normal on their first computer.

The second computer receives a stream of the play and uses optical character recognition software to decipher the cards. Another program then analyses the game information and gives the GTO response for almost all plays.

This, of course, is more than enough to win against almost all humans playing hyper-turbo HUSNG poker and a multi-tabling bot using this technique can win huge sums.

Although the ploy has been known in theory for quite a while, it’s the first time the poker community has seen it in action and detailed in such a way.

Who is behind the cheating

The anonymous source explains that the bot ring operates out of Bulgaria and hide their true identities using VPN software that shows up as Germany and Malta.

“If the sites were to check though all of their ID documentation would be Bulgarian,” godmode49 claims, naming an individual known as Xrab, aka Ivan X.

He also claims that 888, WPN and Microgaming are being targeted up to $1k stakes at HUSNG, the team also developing special software to avoid detection, mentioning that partypoker’s bot detection might force them to focus on other sites more.

Who is Sergei Radulov?

The whistleblower names the bot’s developer as Sergei Radulov, and the video expose reveals chats between Radulov and those looking to purchase the bot software.

A contract shows that would-be cheats have to pay $25,000 and promise 25% of profits made from its use. 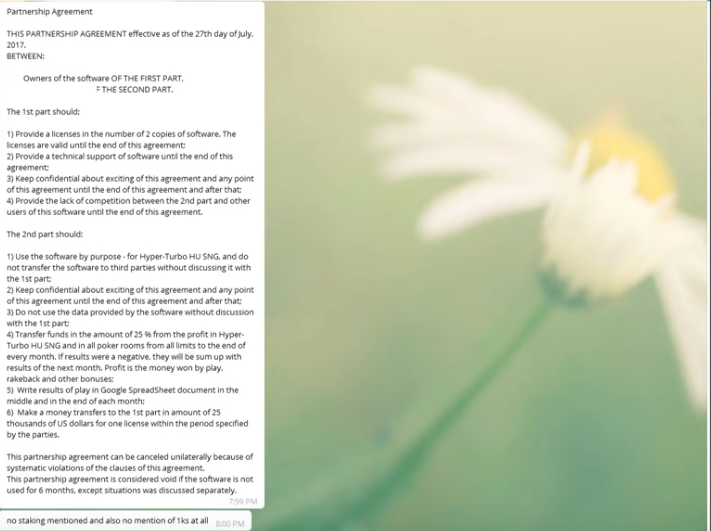 Although the OP on 2plus2 was actively involved in the cheating, coming clean about it for whatever reasons will allow online poker sites to clamp down on those involved, and also fine-tune their detection methods to spot similar methods in the future.