You’re only going to get them one time in several thousand hands, and when you do there are only two hands that can beat them, so folding quads seems like a very unlikely occurrence in any event. But it happens – and here’s how the pros have found a fold with one of the strongest hands in poker!

But just before we start with famous folds, take a look at what might happen if you make quad aces in the World Series of Poker…

The ultimate cooler indeed, but take a look now at how some players manage to get away from their big, beautiful hands…the top 3 follow, you pick your favorite quads fold!

1. “I’ve never seen a fold like that, absolutely not!”

It was a $1milllion buy-in (!!) event at the 2012 WSOP, and Russian cash-game king Mikhail Smirnov found himself with 8♥ 8♦ in the small blind calling a raise from Tom Dwan. The big blind, John Morgan, also called.

The turn fell 8♠ giving the Russian quads, so he made a pot-sized bet of 200,000, which again Morgan called instantly.

When the K♠ hit the river, Smirnov over-bet the pot only to see Morgan fairly quickly shove! Smirnov, facing an all-in for his tournament life, folded his quad 8’s face-up, to the astonishment of everyone at the table and those watching.

"For me, it was a very easy fold,” Smirnov explained afterwards. “If he had two kings before the flop he would have re-raised Dwan, because he’s been active and raising a lot. So, two kings was impossible. Two jacks, in theory, was possible.”

"He was like all-in, no problem. Before he had been playing very carefully and tight.”

Smirnov put Morgan on exactly 10♠ 9♠ for the straight flush, and folded quickly, although many couldn’t quite do the same.

"I personally couldn’t have done it,” said Phil Galfond. “I’ve never seen a fold like that, absolutely not! I’d lose sleep. But, I think it was a reasonable fold actually. There are definitely very few hands John could have had that weren’t a straight flush. Jacks full was probably the one that made the most sense, other than a straight flush.”

Online trollers were less polite as is usual. “Smirnov is an idiot!” wrote ‘Wolfed’. Others were more thoughtful, Jay16 posting:

"Great players have to be able to fold the 2nd nuts from time to time, it's just not usually quads... I couldn't make the fold but his thought process is rational.”

2. The spades have it again!

This year saw a similarly ‘crazy’ fold, this time debut bracelet winner Kyle Bowker laying down the quads in the Main Event when faced with a nasty river card and bet. But could you have done the same?

What beats him? Only the exact holding of Q♠ 10♠ and according to Tim Reilly and other players at Bowker’s table, he folded the hand after having the clock called on him, Reilly also stating that there were only two bets on the river.

When Allen Kessler tweeted the story he got this amusing response…

AllenKessler@WSOP I don't want to live in a world where this is correct. And I'm a bigger nit than you.

As always the forums went wild over the fold, ‘ISmellToast’ on 2+2 posting:

"Not sure what the action was in this hand but almost no chance that fold is not completely horrible. Do these guys in the main think they are in a James Bond movie or something?”

Chrisp200 made a somewhat valid and amusing point:

"The guy who folded quads won the 3K PLO WSOP Bracelet 4 days ago. Maybe he just psyched himself out because of all the PLO he'd been playing. #onlythenuts.” 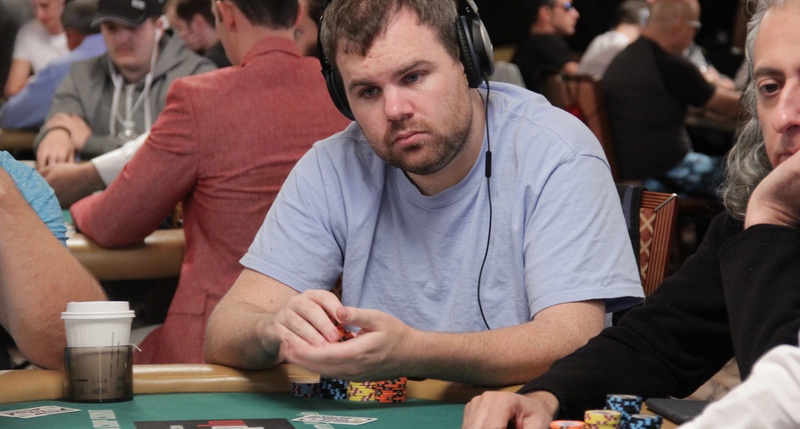 How about occasions where you might consider folding the quads on a slightly scary board but have the balls not to? Who better to ask than Phil Ivey – a man who can spot an opponent’s real holding from a mile away!

Let’s revisit the 2009 WSOP Main Event, just to keep parity between the size and prestige of the tournaments we’ve been looking at…

With the blinds at 2k/4k, Ivey raised to 11k from the button with 8♦ 7♠ only to find a caller in Bernard Perner, sitting with 2♥ 2♦ in the big blind. The flop appeared…

and Phil had to like it. However, it was Perner who donked out 22k into the 28.5k pot, Ivey looking ever-so-slightly amused as he flat-called. The turn came…

and Ivey’s full house was complete. Perner checked and then called Ivey’s 40k bet, the pot now 152k and getting serious. When the river fell…

The commentators described Phil’s hand as having gone from “rags, to trip, to full house to quads!” Perner checked the river and Phil bet out 80% of the pot. But wait, the 9♥ 10♥ beats him? Why so confident?

Phil has been paying attention the whole hand – the donk bet doesn’t fit a drawing hand, the river check doesn’t make sense unless he knows Phil will bet – and it’s a big ask to put those together and add in the probability of that one single hand being in Perner’s corner.

So, what happens? Perner just calls, somehow thinking his 2 pair might be good. Of course, shoving all-in is the only test of Ivey here, but I don’t doubt he would instacall – the hand played out a bit differently from the previous two and Ivey could never find a fold of quads here!