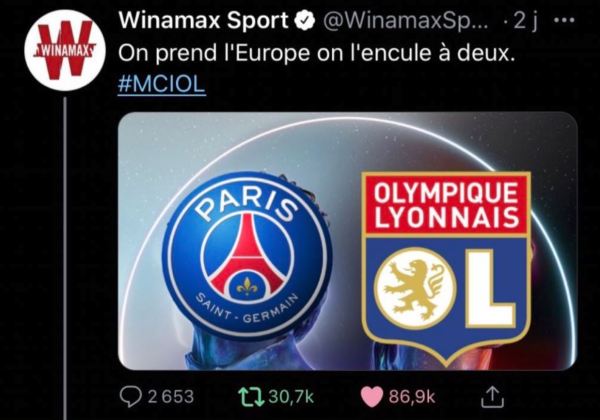 The French in the tweet above - ‘On prend l’Europe, on l’encule à deux’ – translates as ‘We take Europe, we fuck two’, referencing lyrics from rap group PNL.

Apart from being generally offensive, the French verb ‘encule’ is taken to mean ‘fuck in the ass’, hence the homophobia claims that followed the tweet.

The tweet was designed to celebrate both Paris Saint German and Olympique Lyonnais reaching the Champions League semi-finals, PSG later making it to the final.

Winamax also own the country’s most-popular poker site, and as with other online operators in France is answerable to ANJ – L’Autorite National De Jeux - France's online gaming regulator.

Politicians immediately jumped on the offensive statement, drawing ARJEL, and even the Prime Minister, into the situation.

‘In France, gambling is prohibited, except by dispensation. Faced with the lack of ethics of @WinamaxSport, @gouvernementFR and @ ANJ_FR must suspend the authorization given to Winamax to offer sports betting.’

The ANJ issued a statement that the tweet ‘does not appear to constitute grounds for suspension’ but did call on Winamax to voluntarily delete the tweet.

The regulatory body also stated that “given the risks of incitement to gambling for minors” they would be “particularly vigilant in monitoring the promotional strategy that Winamax will submit to it next October”.

The very public arguments were not helped by Winamax releasing an ‘apology’ tweet, that many found unconvincing…

‘We immediately delete our "shocking", "abject" and unbearable tweet.’

“Hateful and homophobic remarks must be banned from social networks!”