From Bullied to Battlestations, Gamer Djarii Joins The Poker Ranks

From being relentlessly bullied as an ‘ugly and weird’ schoolgirl to a life as one of TwitchTV’s most popular gamers and a recent addition to the poker ranks, life has been nothing if not interesting for English rose Sophia White – better known to her thousands of followers as ‘djarii’…

Now a Unibet poker ambassador, djarii splits her time between the gaming world and the poker felt, never quite getting around to the art degree she had planned in Edinburgh, but making up for it by bringing ‘cospaint’ to the wider world of gaming.

A highly-artistic take on the cosplay subculture, djarii tells me straight:

“I don't ever cosplay! Cospaint however, is what I call the mix between dressing as a character and bodypainting. That is a recent addition to my life!”

If poker is also a relatively new sphere for djarii, then gaming has been around since she was a child – “a big part of my life since the very start” says the streamer who was “raised on video games”.

“Nintendo, Playstation, I've been gaming since the beginning” she says happily, with fond memories of when “my dad and I would play video games on the weekend together.”

Just as she tells me she is “notoriously bad at every game I play” I stumble upon her ‘Funny and Fails’ clips on Twitter, and I’m left wondering if she’s winding me up or just being self-deprecating…

…but there’s a side to the ‘Sophia White by day/djarii by Twitch’ dual-life which might explain a lot, such as when I ask her about being one of the most recognised and beautiful Twitch streamers in gaming... to which she replies:

"That's a pretty subjective statement. I think there are many beautiful and recognised people in gaming!”

As polite a ‘shut the fuck up’ as I’ve ever received, and a later admission is revealing:

“I was bullied profusely throughout my entire childhood for being 'ugly' and 'weird' says djarii, adding that “the latter probably surprises people less” – and with 33,000+ subscribers on YouTube, almost 50k followers on Twitter, 60k on Instagram and a staggering 262,785 on her Twitch TV channel it’s hard to believe she was once unpopular, unless sheer envy was involved.

Stepping away from the personal and focusing on the professional, djarii is a member of the e-sports collective Team Method, created by her “significant other” Sco…

…his UK-based Team Method known primarily for their huge presence in World of Warcraft – which happens to be djarii’s own favourite game - and now making a name for themselves across other games.

If she had to (prompted by yours truly) Djarii would in fact choose World of Warcraft as her ‘gaming world of choice’ to live in, although she admits

“It's impossible to choose a character, though being one of the dragon aspects sounds pretty neat!”

There has been a fair bit of crossover between gamers and poker players in the past, the most famous of course being Bertrand ‘ElkY’ Grospelier who became the first dual-sponsored pro and famously took on Daniel Negreanu in a Hearthstone showmatch live on Twitch at the 2015 BlizzCon.

“My friend Hotted got me into poker for the first time, then it kind of stuck ever since then,” with the gamer explaining that her green felt sponsors Unibet “have played a huge part in welcoming poker into my life!”

“The best thing about poker is the adrenaline rush on live tables, without a doubt,” she tells me enthusiastically, “especially when you have a monster hand and someone is betting into you!”

Her least favourite aspect of the game?

“The feeling when you bust a live table, you have to smile, be courteous towards the other players and do the walk of shame out the casino,” and we all know that feeling all too well!

About her poker sponsorship she states:

“Unibet are a great family who have helped welcome poker into my life and supported me throughout this entire journey. They're amazing and I am honored to be an ambassador for them,” with fellow ambassador and long-time pro Ian Simpson taking her under his wing late last year…

When quizzed about her all-time favourite poker player, djarii hedges her bets, or perhaps just keeps her cards close to her chest, telling me only:

“I've met a bunch of amazing people in the poker world, including poker celebrities, but my favourite poker players are the ones who sit down with me, help me, and don't make me feel silly for making a bad call. It's hard to pick one person in particular, but everyone in the Unibet family treat me that way!”

There is one favourite she’s not scared to mention, however, and it’s back to ‘cospaint’ for this, djarii telling me “I would love to bodypaint Jordan Hanz” when asked to pick a suitable candidate for her artwork – art done in real time while streaming live on Twitch TV for the most part…

A warning, however, for anyone who finds clowns to be the scariest things in the world… the artwork of Jordan Hanz is not suitable for minors or those with a sensitive disposition..!

So, we have a multi-talented and beautiful (in everyone’s eyes bar her own) young English girl fighting her way through the real world and various fantasy worlds – but where will this lead her? Where does Sophia ‘djarii’ White see herself in 5 years’ time.

“Hopefully, still on this path,” she tells me, “having made a much larger dent in the industry than I would have thought. I want to be a role model for women in gaming and help empower those who have taken the same path as me.”

If poker is a part of that future, then all the better… 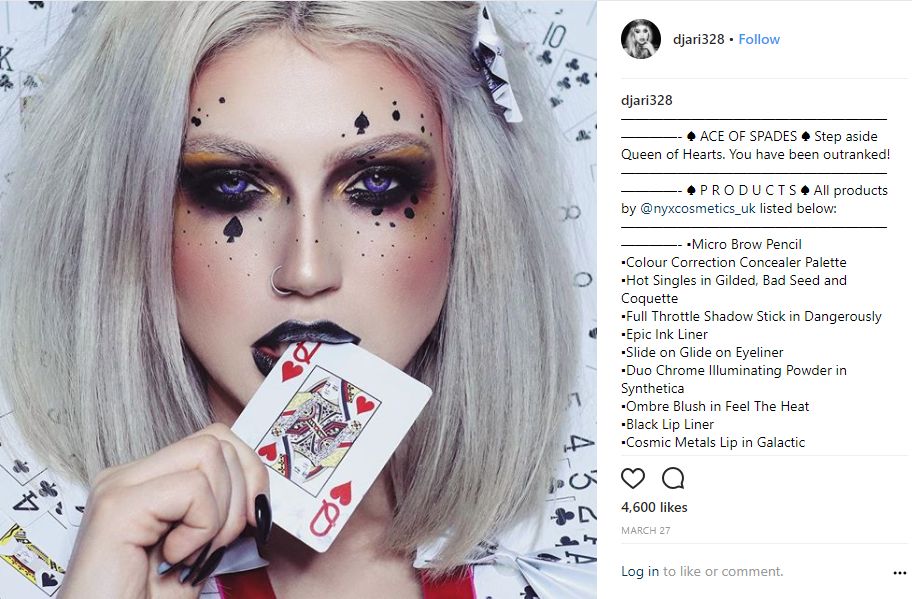