The all-time winningest female poker player on the planet rubbed elbows with one of the best voice actors of all time when Vanessa Selbst and Hank Azaria were seated next to each other at a charity poker tournament for Broadway Cares/Equity Fights AIDS.

It was the third annual Broadway Bets poker tournament and was held May 15 at Sardi's restaurant in New York City - smack dab in the sprawling theater district. Hollywood celebrities came out in full force for a game of poker and to raise money for HIV/AIDS, with a whopping $286,900 donated to the cause.

That total is a new record in the three years that Broadway Bets has been run, a testament to the giving nature of the show business types and poker players in attendance. In addition to Azaria and Selbst, those celebs included Steve Martin, David Schwimmer, Dr. Ruth Westheimer, Laurie Metcalf, and Poker Hall of Famer Erik Seidel.

Although Seidel was likely the most experienced poker player in the house, the title and first place prize of round-trip tickets and hotel accommodations to watch the Tampa Bay Buccaneers play host to the New York Giants went to Ken Ruck, a fan of Broadway theater. With three players remaining, Ruck managed to eliminate "wild and crazy guy" Steve Martin in 3rd place and fellow Broadway fan Joan Siegel as runner-up to claim the victory.

Along the way, the 230 players seated at 24 tables had lots of fun playing poker for a worthy cause. The three-year total of money raised for the charity via the Broadway Bets game has now reached $653,250. 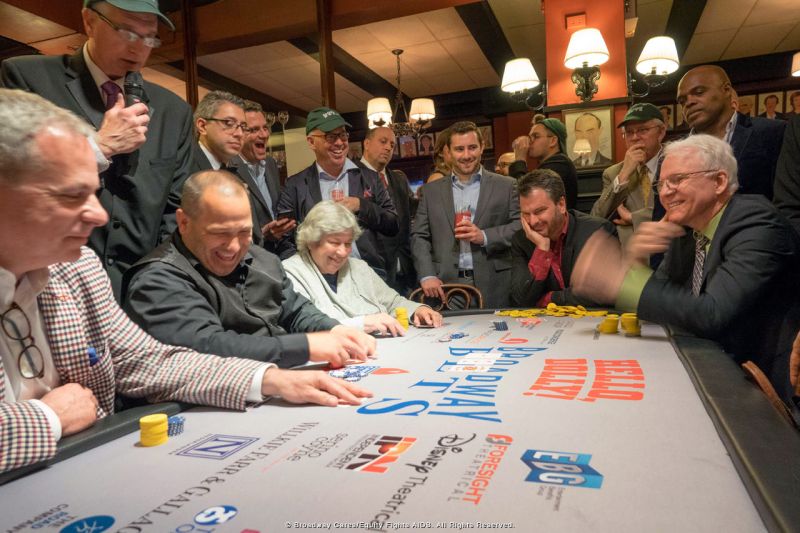 Azaria, of course, is the voice of a bunch of characters on The Simpsons including bartender Moe Szyslak and convenience store proprietor Apu Nahasapeemapetilon. His acting credits are many, including his newest TV series as a baseball announcer on Brockmire.

Selbst devotes much of her time away from the felt supporting various causes. She is big on fighting social injustice, establishing the Venture Justice foundation in 2010 that aims to take an aggro approach versus such inequities as the government's abuse of authority and misconduct by the police.