PokerStars remains without question the most popular online poker room out there even after all these years and attempts by other sites to dethrone it. And it is NOT even close - they have by far the best software optimized to enhance the experience of both the grinder and recreational player, the most variety of games, and the most traffic. PokerStars also has arguably the best support and until recently, the site run by Amaya even had some of the best rewards in the industry. Of course, this isn’t the case anymore since the Supernova Elite level is basically obsolete and just two weeks ago, the site announced a new major VIP Club revamp that could trim down the rewards even more.

Even so, nobody can really compete with PokerStars and that’s why it is the most beloved and yes, the most hated poker room on the internet. Many earned lots of money playing there but even more lost fortunes. And that’s where Fuckpokerstars.com comes in, a place dedicated to all those who lost their bankroll on PS and think that their RNG is rigged. But is it really? Or are those haters just sore losers who want to blame somebody other than themselves? And is this Fuckpokerstars.com worth mentioning? Well to some degree it is and you will have the read the next lines to find out why. 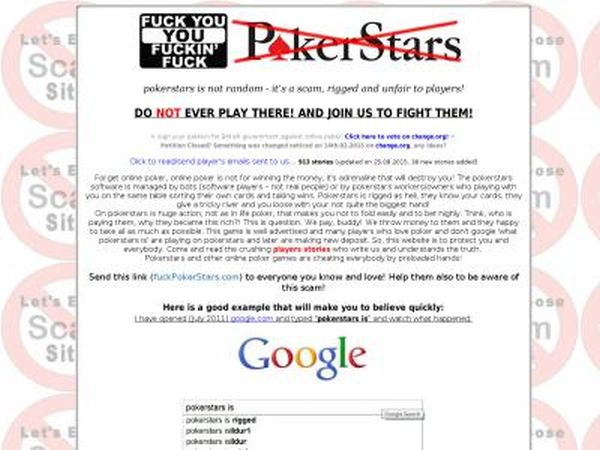 Besides their countless horror hands that you can experience yourself by just grinding online poker and some very questionable plays in the process (basically how NOT to play your big hands), Fuckpokerstars.com made an interesting experiment tracking milions of tournaments on PokerStars and filtering only the situations in which two or more players were all-in preflop. The outcome was 1,360,000 tournament hands selected and analyzed carefully.

All those hands were grouped into four categories: 80% chances of winning the hand versus 20% - basically pairs vs. smaller pairs - 70% versus 30% - situations like Ace-King versus Ace-Queen so basically bigger kicker vs. smaller kicker or pair vs. one overcard - 60% versus 40% - two cards versus two smaller cards like Jack-Ten versus Seven-Eight - and flips close to 50% versus 50% - basically pair versus two overcards.

The results were somewhat interesting: the standard deviation - which is what one should expect based on statistics/mathematics minus the actual results - was well within limits in the coinflips and the 60/40 situations. In the 80/20 and 70/30 situations though, the deviation was off: in the pair vs. smaller pair situation, the overpair actually won 72.7% of the time which is indeed way under the expected 81%. In the 70/30 kind-of hands, the smaller kicker won the pot 41% of the time which is way above the expected 30%. According to Fuckpokerstars.com, over 475,000 70/30 hands were analyzed so this deviation seems to be something more than just plain-ol’ variance.

Moreover, in the Ax vs. Ax battles, the Ace with the smaller kicker won the hand 4% more than it should have been. And the Ax vs. pocket air battles, the Ax won at showdown 12% more often than what math usually tells us. Aces galore on PokerStars right?

Editor’s Take - The Truth Is Out There!

Well, for one who has played a fair amount of tournaments on PokerStars as of late, this is not quite news. Indeed, as you play more and more on PS, you start to believe that Ace with a higher kicker is actually more of a coinflip versus Ace with a lower kicker or that your big pocket pair doesn’t win often enough against the Ax type-of-hands where x is smaller than your pair (a standard 70/30 situation one might say). And yes, you would even agree that the action postflop is way over the limit - big hands running into bigger and bigger and bigger hands - compared to some other smaller online poker sites. But does this mean PokerStars is rigged? Or maybe, just maybe, our process thinking is actually flawed?

Yes, it is true, ALL online poker sites, including PS, need to be audited seriously by public organizations that actually care about the safety of its citizens and not by private companies based on some financial heavens like the Fuckpokerstars.com petition suggests. We all know scam sites like Ultimate Bet and Absolute Poker were both audited by such private companies and let’s not forget what flaws their software had. But to call PokerStars scammy is way over-the-top. What we should do first is actually look in the mirror, study our play and see what we have actually done wrong and how we could have played a certain hand better. We actually remember a bad beat much clearer than a hand in which we cracked somebody’s Aces so maybe that’s why poker feels unfair sometimes.

And since you want to play on the biggest poker site of them all, don't forget to think about variance as well - you will play MTTs on PokerStars against thousands of players so you will have to win many, many flips not to mention give several bad beats in the process to emerge victorious. However, if you play on a smaller site with only several hundred players per MTT, you will have to win way less hands in order to reach the top of the ladder. And if you think there’s too much action on PS, think of how many flops are dealt with every second of the day. Or maybe think of this year’s WSOP Main Event and it’s crazy action with many quads and big hands vs. Bigger hands situations.

And if you aren’t still convinced, how about trying out an exercise a friend of mine always does when he thinks the site is robbing him? Just take a deck of cards, shuffle it yourself, deal like in a regular Holdem game and behold the RNG in action. How many bad beats did you see?

Now, is the whole game of poker rigged?

What do you think? Is PokerStars rigged? Is maybe the whole online poker rigged? Or do we have a flawed process thinking when it comes to the game we love most? Be sure to share your opinion in the comment section below.

if you were given a chance to win say $500,000 and the person offering you this money said you have to make quads (four of a kind) you have 2 options.. play 300 hands of online poker or take a deck of cards and place out 300 sets of 7 cards (you need to make quads to win the money) what would you pick be Knowing that a deck of cards does not play the same as the mirror system that determines your cards online.. exactly.. i dont know the right answer, you don't know the right answer, your uncle Bill does not know what to do here.. but yet the game is still called Texas Holdem live or online.. it's decieving.

Best Ways to Deal With a Bad BeatPoker Gossip & Opinion