In 2016 Jason Mercier has pushed the boundaries on what is possible at the World Series of Poker. He hit the headlines with his crazy prop bets and then ensured that he was not writing cheques that his poker game could not cash by quickly winning two bracelets, sending Vanessa Selbst into a desperate rush to offset the action to save her net worth. Jason continues to flirt with his third bracelet and there remain events left where he could secure this amazing feat.

The multi-bracelet winning performance by Jason Mercier was already enough to write him into poker folklore – in the future when we discuss the 2016 WSOP we will have to talk about Jason – surely there was no way he could make even more headlines this year?

But he did. Moments after busting out of the $5k and missing out on the chance to win her first bracelet, Jason Mercier’s girlfriend Natasha Barbour was destined to experience a life moment she will never forget. As well as the $348,374 prize for her excellent third place finish in the $5k No-Limit Hold’em event that had 863 entries for a prize pool of $4 million, she was left shocked as Jason dropped to one knee, revealed a fabulous engagement ring, and asked for her hand in marriage. I understand she said yes. 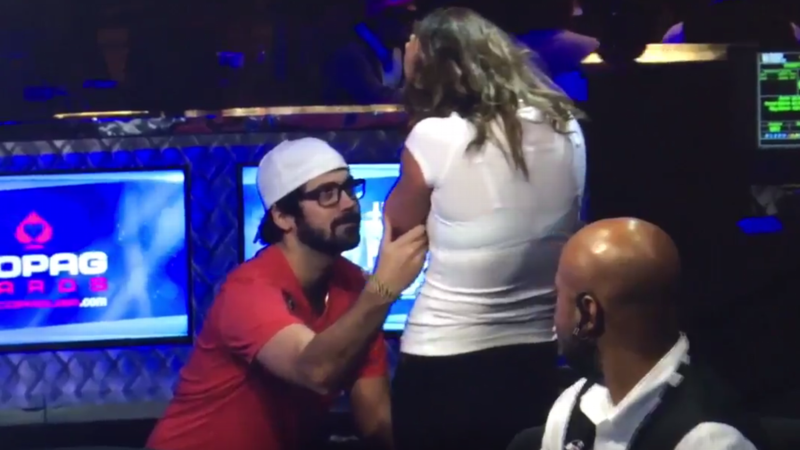 It’s been an amazing WSOP for both of them and one they will remember for the rest of their lives. With all the good luck they have had, it’s a wonder there is any left to share around for everyone else!

Big props to Jason for securing multiple man points as his plan to either add to her win or make the pain of narrowly missing out on a WSOP bracelet feel less painful clearly worked. Natasha tweeted this from her twitter account @Natashabarbour

THE BEST DAY OF MY LIFE 💍

It is well mentioning that Lebanese poker player Natasha has a fine poker pedigree of her own and her excellent third place finish is no fluke. Prolifically active on the poker circuit for many years now, she won a WSOP Circuit event in 2010 and a WPT Regional Series event in 2011. She has cashed in many WSOP events and came close to a bracelet in 2015 finishing runner-up for a $284,911 cash in the $1,500 No-Limit event that had 1844 entrants. The winner of that event was Benjamin Zamani. She has lifetime cashes of over $1 million in live tournaments. Heads up poker battles with Jason over dinner must be intense!

Who would bet against Jason and/or Natasha getting to the final table of the Main Event this year? Anything seems possible for them! How about a November 9 wedding? The poker world would certainly sit up and take notice. Jason has rewritten the poker history books and is quickly rewriting the rules surrounding what can be called a “heater”, but we shouldn’t forget the excellent series Natasha has enjoyed too, for many reasons!

Congratulations from everyone at PokerTube to both Jason and Natasha on their engagement. We note that their future offspring have the potential to be decent poker players and that’s putting it mildly!