Jungleman Dan Cates is no stranger to videos going viral following the incredible Playboy bunny strip poker routine he was involved  in last year, but his latest effort is in a league of its own – ‘The Joker meets MachoMan’ according to Joe Ingram…

Jungleman’s descent into a villainous role came about on the back of his recent mini-match against Phil Galfond, a unique sidebet seeing the loser publicly proclaiming his vanquisher to be ‘the better man’.

“You know what Falcons?” Jungleman started, using his new pet name for Galfond. “I’m gonna rip your claws out, I’m gonna tear your talons off, I’m gonna destroy you, crush your spirit, I’m gonna show your carcass to the whole world!”

Not exactly what poker fans were expecting from a ‘kudos to my opponent for winning’ speech!

“In all seriousness Falcons – Mr Phil Galfond I should say – is the better poker player because he outplayed me this round. He’s for sure the better PLO player – he never gets angry or tilts as far as I’m aware, he’s very competitive in all the games. He’s the better man because he treats everyone with kindness, no matter how they act towards him, even if they act badly, he still treats them with kindness. He’s always humble. He somehow manages to run multiple businesses while playing good poker, and I really respect that. I hope one day in particular I can treat people with as much kindness as Mr Falcons does, but…”

And here Jungle decided he said enough nice things, and it was back to the dark villain persona and a warning for their real PLO Challenge match still to come…

“Next time, Mr Falcons will have his match set out for him – I will have my revenge. Your days are numbered Falcons! I am gonna fucking destroy you!!”

It was all a far cry from this time last year when Jungleman shocked the poker world by appearing in a NSFW Playboy bunny ‘strip poker’ photo and videoshoot in Cannes. 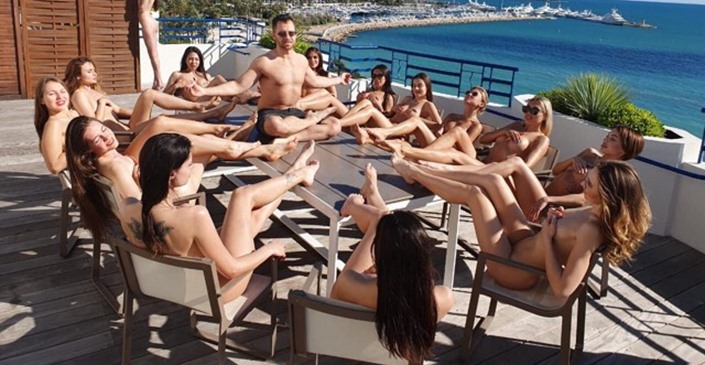 That one only descended into a softcore sex scene with Cates and a scantily-clad model!

What’s next for Jungleman in his ‘acting career’ is unknown, but it’s almost certain to be another outrageous affair.