The YouTuber boxing battle between KSI and Logan Paul cost one punter $30,000 after his bet on the favourite backfired - Logan Paul losing a controversial split decision in the internet celebrity rematch.

The anonymous punter was among millions who tuned in to the live-streamed fight, English fighter KSI taking an unexpected victory over his US opponent.

A win for the American would have seen the gambler take $46,666, a 50% ROI, but the six rounder - the pro debut of both men – saw KSI edge the win after Paul had seen points deducted for hitting his opponent while he was down. 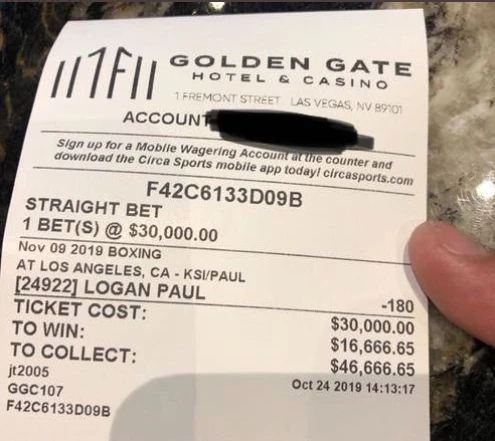 In a sign of the celebrity times we live in, both men earned a reputed $1million basic pay for their scrappy affair, dwarfing the purses earned by most seasoned pros. Add in their share of the ticket sales and DAZN stream subscriptions and the true figure will be much, much higher.

As fight fan and boxing writer Brian Mazique wrote on Forbes, interest in KSI-Logan Paul articles were three times that of recent pieces on the likes of the recent Canelo Alvarez v Sergey Kovalev bout.

As we revealed, bookmakers had Paul as a slight favourite following their Manchester draw the previous year – punters able to get 4/1 on KSI winning by decision in the run-up to the rematch.

Our own straw poll had KSI as a slight favourite among poker fight fans, so hopefully they put their money where there Twitter mouths were and made a nice return on the fight!