The moderately small South American country Uruguay does not usually get so much attention - however, much of the poker world is now fixated on the nation of 3.3 million as it hosts the latest leg of the Latin American Poker Tour (LAPT). 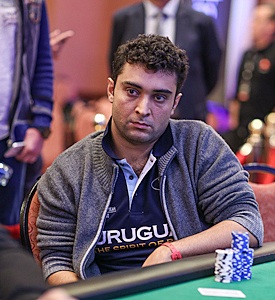 A total of 267 players from all over the world turned up for the Main Event’s first two starting flights, of which 95 survived. Regular LAPT player Chadi Moustapha (right) finished the first day of play as the chip leader, with a stack of 197,500 to his name. That puts the former LAPT Peru runner up in a good position to go far in this event.

Another familiar player is also high in the chip rankings going into Day 2 of the LAPT Uruguay Main Event: LAPT6 Peru Main Event winner Patricio Rojas will enter the second day of play with 133,100, which leads all of the Day 1A survivors.

While Rojas is off to a strong start, he will have to get past Moustapha, and Brazilian six-time WSOP cashing Jorge Breda, who finished Day 1B with 177,500 chips.

The event is set to get even more competitive from here on in as the remaining players battle for their share of the spoils. The prize pool for this event was announced on Day 1B, and the top 39 players will leave with a boost to their bank accounts.

Despite the event being held in Uruguay, the majority of the players at the event – 160 out of 267 - hail from neighboring Argentina. Brazil had 50 players turn out for the event while 46 came from the host nation.

As always, here at PokerTube we'll keep you up to date on the LAPT Uruguay Main Event as all of the action takes place.