Fast Eddie: Yeah, like a church. Church of the Good Hustle.

Charlie Burns: Looks more like a morgue to me. Those tables are the slabs they lay the stiffs on.

The lines are spoken early on in the movie and set the tone for what is to come. Take the Wittertainment view that Jaws is not really about a shark, then The Hustler is not really about pool. Ostensibly about a small time hustler taking on the best in the game for his first big score, the movie is far more about the almost religious nature of things done well for their own sakeand the conflict with the more venal desire for money.

A young upstart gambler decides to make his big break and play with the best in the game, ostensibly for money, but really for glory. The young gambler takes a thorough drubbing and goes off on a sort of mini-bildungsroman to lick his wounds and learn what it was that beat him the first time round. In the final act, he returns to the ring to finally see if he’s really good enough. 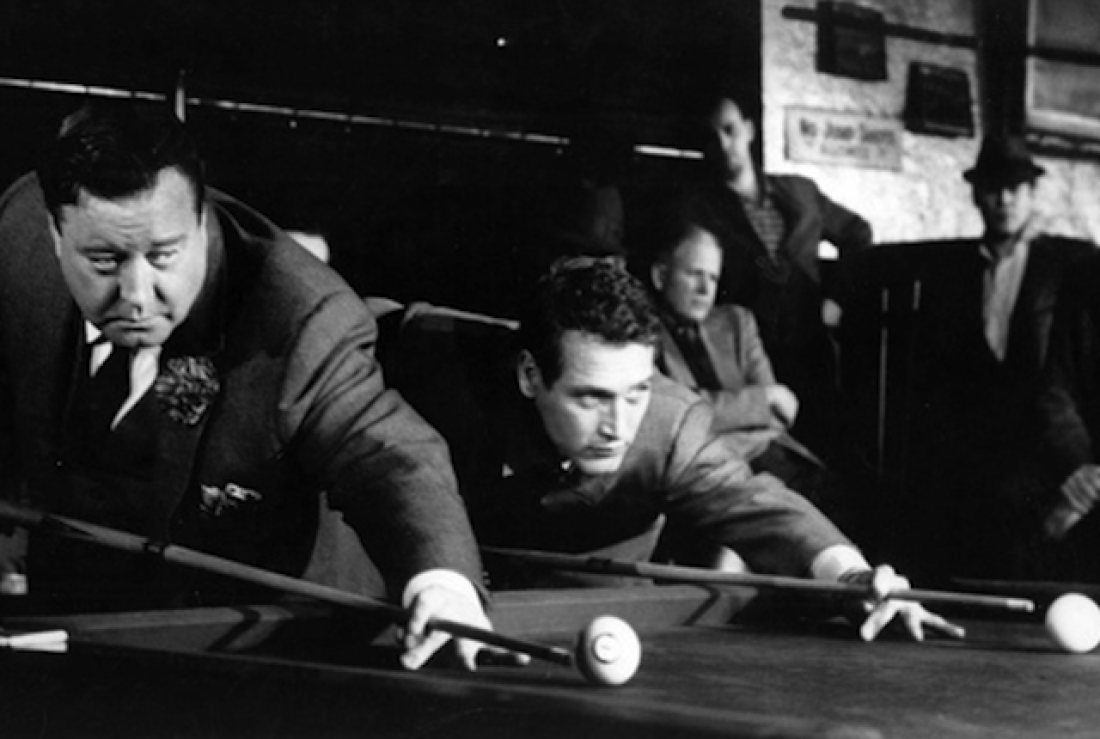 So it’s Rounders with pool cues. In this case, the young gambler role is taken by the incomparable Paul Newman, playing ‘Fast Eddie’ Felson, and the man to beat is Jackie Gleason’s Minnesota Fats. (A trivia side note is that Gleason’s character is loosely based on a real Minnesota Fats, who Amarillo Slim once beat at pool by insisting he get to choose the cues. He chose broom handles.)

Piper Laurie gives a wonderful performance as Sarah Packer, Eddie’s love interest who drifts through life, studying twice a week at college and drinking the rest of the time. George C Scott does a wonderful turn as the main villain: Burt, a man who is half-snake and half-mentor to Eddie.

The real meat of the film is the internal transformations of Sarah and Eddie, mostly moulded by Burt or by opposition to Burt. Fast Eddie’s desire to beat Minnesota Fats is little more than a McGuffin that drives the plot through the necessary character turns. In the end, we come out of the chute right back where we started: the game with Fats. The question when it happens the second time around is no longer ‘Will he win?’ as it was in the opening. Now we want to be sure he has learnt something from his ‘troubles’.

The Gutter and Transcendence

The Hustler is sometimes classified as a film noir, for its bleak realism and snappy, almost poetic dialogue. The characters are always leaving questions unanswered, requests unanswered. Enigmatic lines like Sarah’s initial rejection of Eddie’s advances: ‘You’re too hungry,’ speak directly to the dramatic situation as well as suggest something far deeper on the edges of the story. Hunger is undoubtedly one of Eddie’s many ‘character’ flaws, but it’s also the darker motivation of characters like Burt and noticeably absent from Minnesota Fats who always seems above the moral morasse which swallows up everyone else in the pool halls he haunts.

Character – like ‘hunger’ – is another words which is laced with meaning by the way the story is patterned. George C Scott’s character, Burt, a man who makes his money managing other people by betting on their talent, is a man who sees through people. “Character,” is Burt’s answer to Eddie’s question:

So I got talent. What beat me?”

It is Burt who destroys Sarah with nothing but well placed words, something whispered inaudibly at a party, a jibe about betting on a cripple, and their final showdown in the hotel room all show a masterful grasp of where the fractures are in her character. He is even able to leave Eddie with some portion of the blame:

This sort of ambiguity, suggestiveness in the dialogue, and what is left offscreen, give the film a sense of transcendence that elevates it far above what would otherwise just be another gambling movie. It pushes Eddie out there into the world of myth, of lancers hunting dragons. It just turns out that Minnesota Fats is not the dragon, and the damsel in trouble would have been better off alone. In this sense, the real finale of the film is not the game with Fats but the showdown with Burt which follows it.

Eddie has some flash of whatever it is that keeps Minnesota so clean, and in that lies his salvation as a character. In one of two striking speeches on pool – both of which resonate with the modern psychological concept of ‘flow’ – he talks about pool like some people talk about art, or even prayer.

But I just hadda show 'im. Just hadda show those creeps and those punks what the game is like when it's great, when it's really great. You know, like anything can be great, anything can be great. I don't care, bricklaying can be great, if a guy knows. If he knows what he's doing and why and if he can make it come off... It's a great feeling, boy, it's a real great feeling when you're right and you know you're right. It's like all of a sudden I got oil in my arm... You make shots that nobody's ever made before. I can play that game the way... nobody’s ever played it before.”

As a Gambling Movie...

...it does everything right, without once explaining the rules of straight pool – or the weird kind of round robin nine-ball they play when Eddie gets himself in trouble. You know exactly what is happening and when. The games are edited to perfection, the faces, the passing of money, the on screen audience all tell you who is ahead and by how much. It is visual storytelling at its best.

The general atmosphere of the gambling life is laid out beautifully in little vignettes: the opening hustle has some of that ‘money won is twice as sweet as money earned’ (one of the most memorable lines from the movie’s sequel The Colour of Money) smugness to it. The short poker game gives a sense of the boredom of slowly losing without itself being boring. Even the choice of certain settings, like waiting for the mark in a high-end betting shop, all capture the atmosphere of the various haunts of gambling men and women.

It also contains some of the most quotable words of gambling wisdom, so well formed as lines it almost doesn’t matter if they are true or not. Lines like ‘Percentage players die broke too, don’t they, Burt?’ and almost every line of Burt’s in his first long scene with Eddie. To Eddie’s complaint that he lost a game because he drank:

"Sure you got drunk. You have the best excuse in the world for losing no trouble losing when you got a good excuse."

The Hustler came out in 1961 and was nominated for nine Academy Awards including best picture. It won in two of those categories and should have won more.

It is one of my favourite films personally, and is a masterpiece generally. There is no real way round this, the film is a classic, not just as as a gambling flick, but just as a movie. I can’t recommend it strongly enough. Five stars and two thumbs up.

Seen it? let us know what you thought in the comments.