The world of poker is replete with stories about, interviews with and discussions of the elite pros. If Phil Ivey so much as looks at a pack of cards in any casino in the world, then a camera is instantly thrust in his face; Viktor ‘Isildur1’ Blom booms and busts his way across the ‘poker web’ and there are a thousand column inches covering every detail of his online exploits.

But what of the ‘unknown soldiers’ of the poker world? The guys who ply their trade on the green felt day-in, day out, spending vast chunks of their lives in a virtual world of multi-tabling, rake-back and MTT’s? What do they do away from their screens? Do they even exist??

You’d be hard-pushed to find a decent interview with one of them anywhere, let alone an insight into what makes them tick and what they do when the money rolls in or pours out. Well that has been fixed, in part, with the real-life revelations of online poker grinder –the legendary Andrew ‘Coopah’ Cooper.

Cooper’s interview at PokerVIP.comhas brought to life a man whom readers of 2+2 might know about, but who is a mystery to the rest of the game’s fans. So why is the Londoner worthy of the attention which millions of other online regs aren’t?

That part is easy: Cooper is consistently one of the highest earners of rake-back in the game, topping the PokerVIP ‘top 200/350’many times and reaching SuperNova Elite on PokerStars. Playing literally millions of hands a year across numerous sites requires a discipline and drive which few possess, and matching this with an “incredibly high and consistent win rate” (which has netted him a profit of over $1,000,000) is virtually unheard of in the poker world.

How does Cooper achieve this? As he readily admits, he is motivated by “money” and adds that he “just f-ing loves the game!” Easy enough to play a game where the drivers are so simple, but what of the other people in his life?

"loved it - the rock n roll lifestyle etc, but my family were super skeptical. Once I showed them the profit and gave them money they understood and realized what it was. Basically when I started making more money than my dad, he respected it.”

As everyone in the game knows, however, it can be easy come – easy go when it comes to poker finances. So what has been the biggest expense Cooper has indulged in? “A $300,000 flat,” he says, adding that his dumbest splash-out was on “fake tits for my ex-girlfriend and an engagement ring”, also noting that the BMW car he bought “wasn’t that sensible for something I don’t use.”

For someone whose everyday rake-back and winnings are topped-off with the ‘rake-back race’ prizes he constantly has his eyes on (“$2500+” monthly earnings on the top 350 race alone) Cooper certainly makes ‘grinding’ seem like a profitable proposition, despite losing $25K on one hand alone playing 50/100 NL.

The highs and lows of grinding 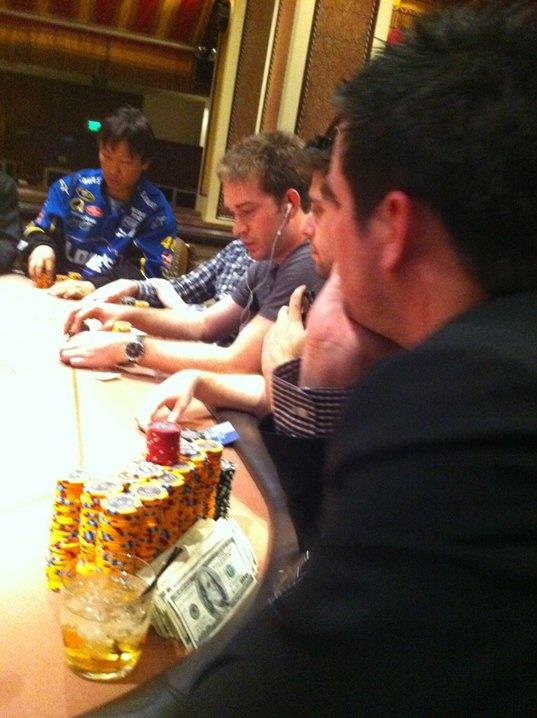 The happiness factor in Cooper’s life is not all money-related, although “not paying taxes” does feature! He has recently invested some of his winnings on a treadmill which he plans to use “to get fit whilst grinding,” admitting that he is “fed up of being the heaviest I have been…I have a girlfriend I need to keep happy!”

The “free time and being able to manage yourself” coupled with it being “always nice to do what you enjoy”, make his life as a poker professional enjoyable, although he does admit to the painful “downswings and loneliness of the game - having to deal with all the bad parts of it yourself”, something which anyone who has tried multi-tabling for more than a few months can attest to.

Setting himself seemingly impossible targets has been a mainstay of Cooper’s online presence. His 2013 thread on the 2+2 forum to ‘track progress reaching SuperNova Elite and $500K profit’ was an instant hit with followers who marvelled at his stats and ability.

Without using HUD’s or poker trackers of any sort a few years back, and admitting to a 100:0 play-to-study ratio, Cooper’s regularly-shared insights into his game, and hand history explanations, helped to dispel the myth that his play was actually the work of bots.

Playing across a range of tables (NL 6-max, SNG’s, zoom) and buy-ins ($600-1k NLHE, 2/500 zoom etc) he hit the SNE target easily enough, but the $500k perhaps wasn’t the most realistic goal when he changed to PokerStars in the early part of the year, coming unstuck several times when battling away from his regs.

The Future is Cooper

Now happily away from the forums and twittersphere phase of a couple of years ago, Andy ‘coopah88’ Cooper has set his sights on some new goals, the most immediate of which is to finish both 1st AND 2nd in this month’s PokerVIP ‘top 350’!

Needing to pull in an astonishing rake of about $15,000 on both the Paddy Powerand Stan James sites over the course of the promotion, it’s a tall order for the Londoner who chooses PokerVIP for “the best service, highest rakeback deals and the top 350 of course”, and is doing it for “the money and challenge”.

And any advice for those of us out there trying to emulate his ‘ultimate grinding’?

“Always question why things happen and work it out. There is a reason for everything so make sure what you are doing makes sense!” states Cooper, before adding, “Avoid the casino games!”