Book Review - Devilfish: The Life and Times of a Poker Legend

I guess I’m among the last of those guys who fought their way up through the ranks the hard way," says Dave ‘Devilfish’ Ulliott in the closing chapter of his autobiography – Devilfish: The Life and Times of a Poker Legend.

"I don’t see that happening now because there’s no need for it. Which is good for the young players, but it’s gonna be bad for the people who read their autobiographies..."

How right he is. It is hard to imagine the clean cut internet kids of today having anything close to the adventures that Devilfish covers in his autobiography - the typical rags – council estate in Hull – to riches – penthouses in Vegas. Along the way there is crime and punishment, violence taken and received, shots fired and money lost and won. And all told with Ulliott’s wide-boy, street-tout flare for language. His style reads like one of Martin Amis’s characters, oozing an old fashioned machismo a little overdone in the oven of insalubrious practices.

Take for example his description of his school where corporal punishment was a daily threat, though he’d ‘never seen it inflicted on the teachers before. When his Chemistry teacher is set alight by one of his more rambunctious wards Devilfish’s only comment is that:

"He burned quite well for skinny bloke. Amazing how many kids it took to put him out though – they just didn’t have enough piss between them."

The seventies working-class schtick is served up warts and all. Ulliott is very candid – almost proud – of his criminal past and his several turns in Rudgate Prison enjoying Her Majesty’s hospitality. This does also mean that the general sense of men being men, sexism and occasional xenophobia is present.

"There’s no one on earth with a better poker face than a Chinaman," he says pandering to stereotype and continuing: "trying to get a tell out of these fellas was like flogging a dead horse. Which, funnily enough, they were already doing in the kitchen."

But this was the past, a different country where they do things differently, and I’d certainly rather these rough edges than three hundred pages of whitewashed self-indulgence of someone with a morality clause in their sponsorship deal.

These rough edges are hard won, at one point he muses:

"Come to think of it, poker had been the only thing in my life that hadn’t let me down, betrayed me, grassed me up, stolen from me, kicked me in the teeth or run away."

The story does cover his several marriages and the resulting breakup, and the occasion he ended up in jail on the turned-coat of a partner in crime, but he also shows great affection towards those wives and friends, not matter how badly the relationship went near the end (like many a hard-man, he also completely melts whenever he mentions his kids). 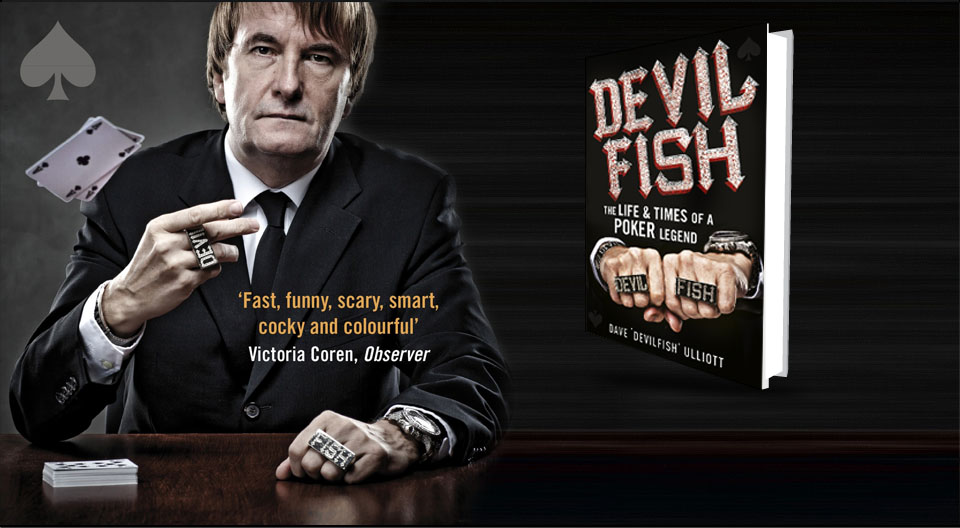 The book is a fabulous self-portrait of a properly rounded, flawed and charismatic chap. Full of fascinating anecdotes from the bad old days of back-room poker and Thatcherite Britain. Reading it for the first time, as I did, just before the second anniversary of him cashing in his chips for the final time also gave many of those stories a heightened poignancy. As the Devilfish himself puts it:

"Sometimes the old stories came back to life, even if the people didn’t."