Eli Elezra released a statement about the controversy that has engulfed the highstakes pro for the past week, insisting “I never hide from my debts” and adding that “$2 million is owed to me”…

The statement was posted by Elezra on the 2plus2 NVG forum, the scene of a dramatic AMA (Ask-me-Anything) thread last week which saw Cole South refute Elezra’s claims to “always pay my debts” by posting SMS extracts that seem to show this to be untrue, relating to an outstanding $40,000 debt.

Elezra’s latest statement on the controversy, however, has done little to dampen the flames – Cole South quickly shooting down Elezra’s claims that:

“I don’t ignore text messages and haven’t seen him or gotten a message from him [Cole South] in years”. 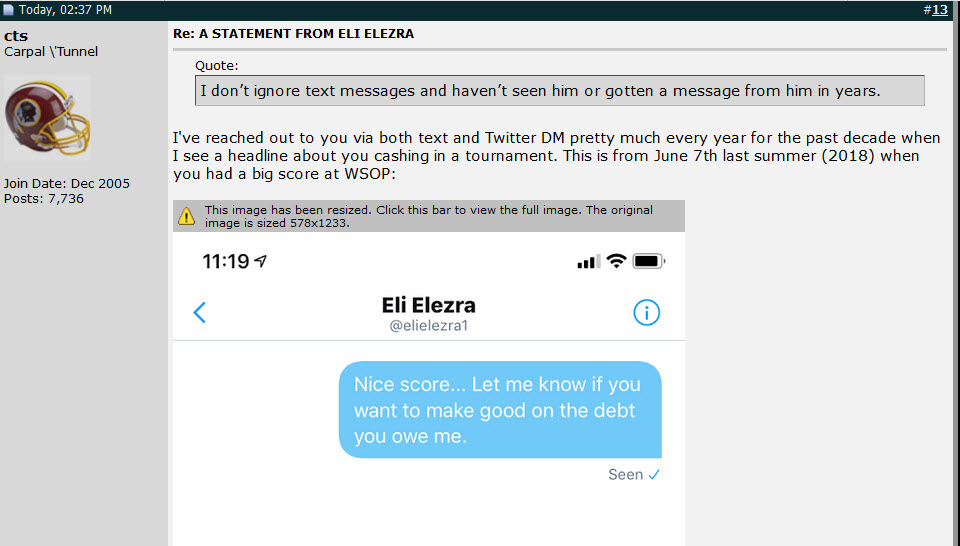 Elezra says of the borrowing/lending among highstakes pros:

“The deals and arrangements they make in this regard have always been private and I believe they will always remain private. It’s nobody else’s business anyhow”.

He adds that his own reasons for having to borrow money, “When the global financial crisis hit many years ago, it really took a hard toll on my business. I lost a lot of my personal wealth”, but that he didn’t want to play for lower stakes – hence the loans he took, many of which are still unpaid according to critics.

The well-known Israeli-born Vegas pro, whose autobiography was recently released in English, claims in his statement that:

“Almost $2 million is owed to me by poker players to whom I have lent money over the years, but I have never gone public with their names”.

“When a poker player decides to lend another poker player money, they do so with the inherent risk that it might not be paid back”.

The statement, which 2plus2 owner and publisher of Elezra’s ‘Pulling the Trigger’ autobiography, Mason Malmuth, had promised was forthcoming, did not go down well with the majority of forumites.

“This statement is just word play. It addresses nothing and is full of information not relevant to the allegations against him”, wrote DooDooPoker.

The full statement can be read here.