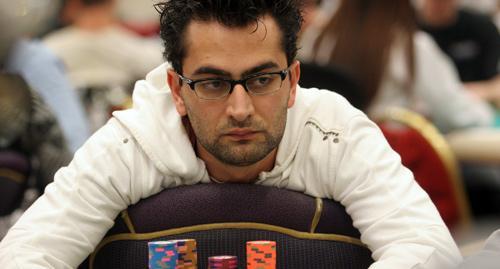 Poker has a history full of strange and wonderful stories, but Antonio ‘the Magician’ Esfandiari may have become the first professional player to be disqualified from an event for urinating at the poker table!

The DQ came at the PokerStars Caribbean Adventure, after Esfandiari had agreed a prop bet with Bill Perkins to ‘lunge’ everywhere he went for 48 hours. Unfortunately for Esfandiari, 24 hours of the physical exercise had left him somewhat sore - and the thought of visiting the bathroom to do his business didn’t appeal to his aching muscles.

So, the multi-millionaire pro decided to grab a bottle, surround himself by a towel and several people, and relieve himself while still at the table! Of course, the tournament organisers took a pretty dim view of this boorish behaviour and disqualified him for "a serious breach of tournament etiquette," according to European Poker Tour President Edgar Stuchly.

'Lunging' is a training method used by athletes in cross-training for sports, by weight-trainers as a fitness exercise, and by yogis as part of an asana regimen.

Esfandiari explained the prop bet in an interview (pre-DQ) with Sasha Salinger, claiming that ‘it was easy money’, and he “was willing to do anything to avoid losing”, although he could have actually just stayed in his room and not lunged the way he did to win the bet.

But Esfandiari is well-known for enjoying such prop bets – although he refused to say how much this one was worth, with some sources stating $50,000 – having previously taken up Perkins’ offer to go without any form of sexual release for one year. The cost to Perkins had ‘the Magician’ managed it? A cool half-million dollars!

“Big bet again.....antonio esfandiari no sex no release of any kind for one year...can he make it?” was what Perkins tweeted at the time. The ‘multi-millionaire hedge fund manager and recreational high-stakes poker player’ won this particular bet when Esfandiari bought himself out of the bet barely 2 weeks into it

Another previous bet between the two had seen Esfandiari also buy himself out early, when the thought of going without bread for a year proved too much - despite the $25K win it would have brought him. On this occasion it cost him $5K for an ‘early-release’.

Naturally, with both players worth many millions each, the price-tags for the prop bets are merely spare change to them – and as Esfandiari explained, it is ‘the challenge’ which interests him.

Another poker prop bet which might have involved urination in strange places came when Nick DiVella took a 5-1 bet from his friend that he could live for 6 days in a hotel bathtub! The details, outlined on the pokergurublog, listed a bizarre set of rules for the challenge, including:

The Esfandiari-like catch involved ‘no toilet breaks’, so you can imagine where and how DiVella might have to relieve himself, although had he required more than urination things could have gotten messy!

The most recent Esfandiari incident, which occurred on Sunday night at the Atlantis Resort Casino in the Bahamas, host to the PokerStars Caribbean Adventure tournament series, led to an apology from the magician.

In an interview with PokerNews, Esfandiari apologized for his "childish" behaviour, which happened on day 2 of the $5300 Main Event.

How to Learn From Your Hand HistoryOnline Poker