Poker pro Jonathan Little has been booted from ACR, the boss of the US-facing site unhappy about Little’s ‘donkey punch’ approach to the WPN network’s star skin…

Little has a large following in poker, his streams, strategy pieces and multiple books very popular with the average player.

However, it seems that his near-constant sniping at one of the hands that helps to feed him, however, finally decided to serve up a slap of its own.

The entire show played out on the pages of Twitter and the 2plus2 forum, with Little accepting that ACR can do as they please if they are unhappy about someone, while defending his actions. 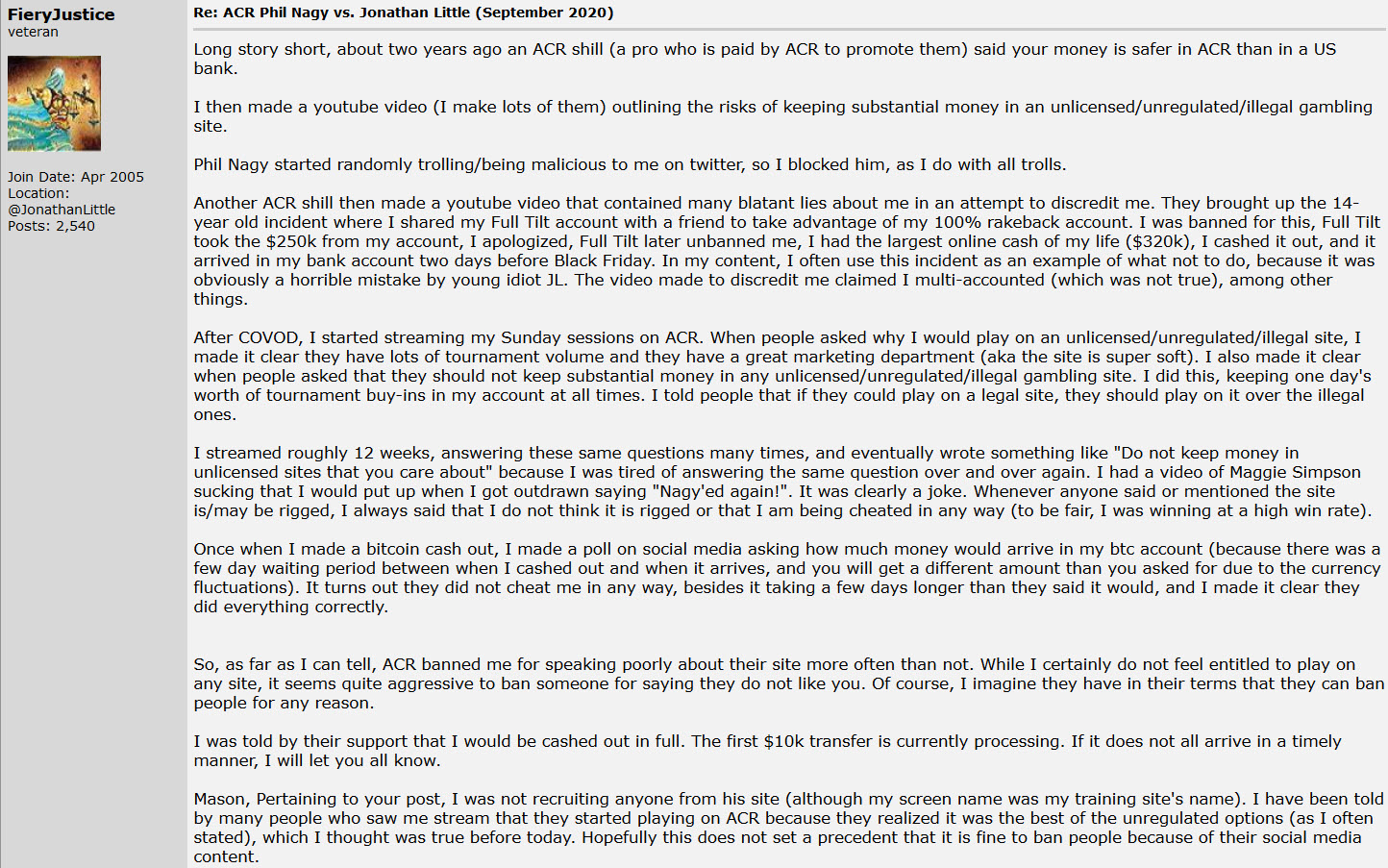 The fans and followers of both sides took their stances almost immediately, of course, several pointing out that what Little called ‘joking’ could be regarded as offensive or damaging to ACR…

“If you publicly trash the reputation of a poker site as a prominent player/content creator, banhammer is a perfectly acceptable response. They allow you to make $. If you choose to hurt their ability to make $, you are even more dead weight than if you just shut up.”

Others felt the ban was inappropriate and that Little had done more good than most for the poker community over the years.

Nagy is known to be one of the most outspoken of all the big online poker room bosses and rarely shies away from public confrontation or discussion.

Last year he appeared on long-time critic Joey Ingram’s podcast and the pair buried the hatchet to some extent, Nagy explaining:

“You can call me a lot of things…an idiot…but don’t call me a thief!”

Jonathan Little also has a colourful history in the game, having to respond to the historic allegations of ‘scamming’ Full Tilt.

He tweeted out his refutation:

“If you are going to bring up a 14-year old topic, at least get it close to right. FTP took $250k from my account and banned me because I shared it with a friend and we played a ton of volume.”

Little was one of the lucky ones who had his account reinstated and then cashed out a $320k win just weeks before Black Friday hit.

This week’s stramash between Nagy and Little will likely rumble on for a bit, but hopefully no serious damage will be done to the reputation of either.

“I'm OK to agree to disagree. I think it would better not to have an influencer saying what John is saying than doing what he's doing. No hard feelings. There are lots of marketing avenues I choose not to take. Playing ACR is a privilege, not a right.”

Little for his part tweeted:

“While I would obviously love to continue playing on a site that has a lot of soft tournaments, know that I will always do my best to speak the truth, even if it is not good for me personally.”