Artificial intelligence won another round against human poker players as the AI program known as 'Lengpudashi' claimed victory at an exhibition in China.

The score is now 2-0 since the beginning of 2017 following the debacle in January that saw 'Libratus' take it to four heads-up pros at Rivers Casino in Pittsburgh. Libratus and Lengpudashi are the brainchild of computer science professor Tuomas Sandholm and his protege, Noam Brown, of Carnegie Mellon University in Pittsburgh, PA.

The match in China was worth $290K in prize money, which Sandholm and Brown, a PhD student, collected. Last December, Sandholm was ranked among the top 10 in the category of most influential scholars of all time in the artificial intelligence field.

The five-day 36,000-hand competition in Hainan, China was deemed "a landslide victory" for Lengpudashi, according to BBC News. The poker-playing robot outwitted 'Team Dragon,' consisting of a half dozen computer scientists, engineers, and investors who fell short in using game theory and machine intelligence knowledge while facing Lengpudashi.

The Chinese team of humans was fronted by Yue Du, a gold bracelet winner at the 2016 WSOP. Du may be looking forward to the 2017 WSOP and facing only other human players after he and Team Dragon took a beating from Lengpudashi, who used bluffs as part of its strategy.

"People think that bluffing is very human, it turns out that's not true," Brown told Bloomberg. "A computer can learn from experience that if it has a weak hand and it bluffs, it can make more money." 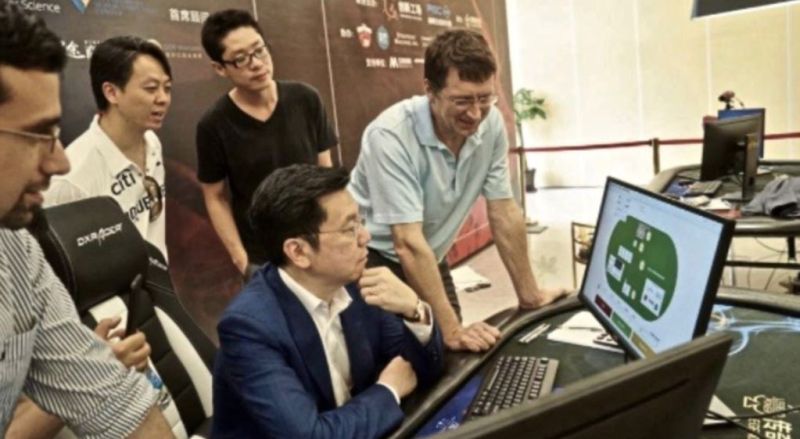 Poker bots have long been a factor at online poker sites. None have reached the level played by Lengpudashi, but there are websites and forums devoted entirely to profiting at poker sites by purchasing, downloading and running bot programs.

Most bots can be had for less than $200 for a 1-year license and can be programmed to compete at the user's game of choice, be it NLHE, PLO, SitNGos or MTTs. Bot users report varying degrees of success, with some claiming to earn in the neighborhood of five big blinds per 100 hands at low stakes action.

Bots are not permitted at any online poker sites and those who flout the rules and are caught run the risk of losing their account balances and face a permanent ban from playing. Speculation is rampant that some sites look the other way regarding the bot controversy, choosing instead to happily collect rake from both botters and human players.