For that one guy who hasn’t though: Casino Royale is the 2006 installment in the long running James Bond series about a British civil servant who travels the world solving crime by drinking too much, having sex, and murdering.

Directed by Martin Campbell (Goldeneye, The Green Lantern) who only ever seems fully competent when on the set of a Bond movie, and written by Neal Purves and Robert Wade whose Brosnan era movies felt as parodic as their spy spoof Johnny English. The twist this time round was Paul Haggis, of Million Dollar Baby fame and Crash infamy, who was brought on to go over the script as well.

Originally based on the novels of Ian Fleming the Bond films veered off from being straight adaptations around the time of You Only Live Twice, by the 16th installment: License to Kill, they weren’t even using Fleming titles.

But with Casino Royale that changed with a new Bond – the best in fact (discuss) – for the new millennium. New in this case involved a return to the 1950s material that spawned him.

For some reason Casino Royale was never adapted by EON*, and is the only novel not to be used, even in title. But once they decided on a hard reboot, Casino Royale as the first of the novels, made perfect sense.

The book’s plot involves Bond being sent to the south of France to play baccarat against Le Chiffre, brothel owner and treasurer of SMERSH (the KGB wet work squad against whom Bond is frequently pitted).

Once the preliminary hour or so of international detective work is done, the film settles into the book’s plot, adapting the material and bringing it up to date and adding a little more style. France is moved to Montenegro, baccarat become Texas Holdem, and brothels become the international stock markets. As an update of the book the film works pretty well. Even when they took the deeply unsettling carpet beater from the book and turned it into a wince inducing knotted rope.

Although EON didn’t adapt the novel previously, the US television show Climax! (a title, not an imperative) did do an episode based on it starring American secret agent Jimmy Bond; and a star studded spoof in 1967 had numerous actors including David Niven and Woody Allen playing Bond opposite Orson Welles as Le Chiffre.

Whether or not Casino Royale (2006) stands up as a remake, I’ll have to leave for another review.

More importantly than the odd one offs of Climax! And Welles, Casino Royale comes in a long line of Bond movies, and it does a credit to the series. Second best Bond film ever in fact as per my objective and uncontroversial list: Skyfall, Casino Royale, From Russia With Love, License to Kill, and OHMSS for the top five. Obviously.

Using its role as reboot it roots all the well worn Bond tropes in the narrative. He wins the DB5 in a card game, and the other Aston Martin makes perfect sense as part of his cover. His affairs are a way of keeping things uncomplicated in a job where the minute he falls properly in love with someone he breaks a record for how many times he can completely roll that Aston Martin. They even get a punchline out of the shaken, not stirred thing, and save both ‘Bond, James Bond’ and the John Barry them for the air-punching final seconds of the film.

It plays knowingly with audience expectations in that regard, and marked Daniel Craig out as his own Bond, while paying tribute to the old films. Sadly, it made a promise in that regard, that the later Craig films, whatever their other merits, were unable to fulfil.

A large part of the reason for the stripped back nature of the film was, like Moonraker before it, Die Another Day had almost killed the series with its ludicrousness. A return to basics was called for, not least because Bond had competition. Always a mirror of contemporary cinema, Bond did what he always does and imitated them.

Bond vs. Bourne vs. Batman

The Bourne Supremacy, which sold us ‘realistic’ action and an anti-Bond who conducted his international espionage with a minimum of technology, a lot of cunning and his fists.

Bond decided to follow suit, having the old writing team of Neal Purves and Robert Wade strip down the scale of the action, and throw out Q. For good measure, EON had Oscar award winning screenwriter Paul Haggis come in for the rewrites, just to be sure.

The year after Supremacy, Batman Begins came out with idea driven action and the origins story of its newly ‘realistic’ hero who conducts domestic espionage with actually quite a lot of gadgets, but also plenty of his fists.

Here too, Bond followed suit, giving us an inexperience, rawer, rougher Bond fresh off winning his double-oh status and still having to learn to be ‘part hitman, part monk’. He is constantly being told off for killing people he should have been smart enough to bring in alive, because unlike Batman and Bourne, punching is not his style if he can possibly just murder someone. 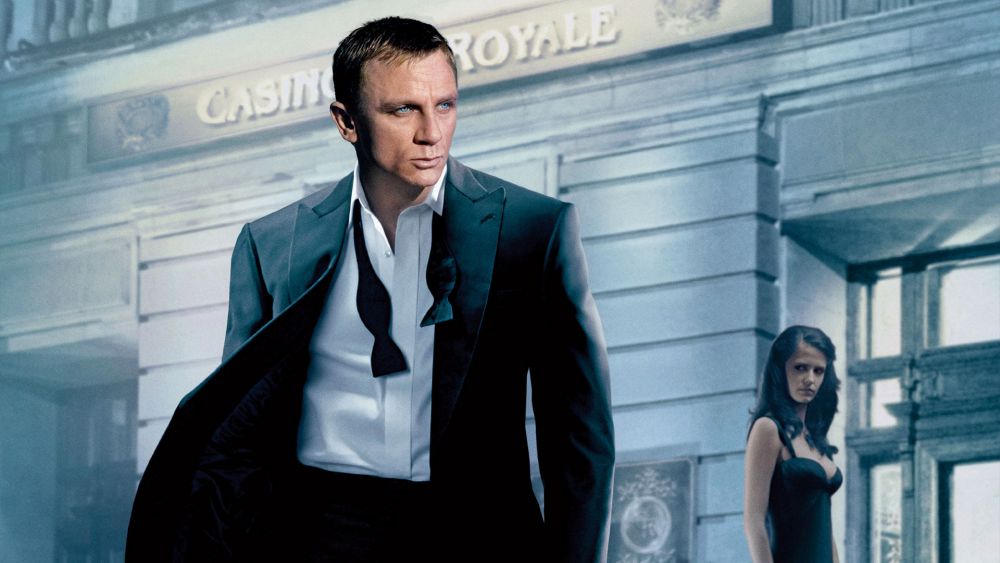 So now we come to what the poker is like. The plot had Le Chiffre, almost felted by the stock markets when Bond foils his criminalising in Miami Airport, take his final $10 million to Montenegro and sets up what M calls ‘a high stakes poker game’, and what everyone else calls a $10 million deep-and-steep donk’n’go. With half-stack rebuys and a cap on the blinds.

The format is somewhat baffling, and the poker does not improve from there. We get all of the movie poker tropes that we are all sick of: ‘this is for the cheap seats’ style commentary from the audience, obvious and highly specific tells, string bets, splashed pots, convenient to read but utterly unlikely and strategically baffling hands and yet….

This is a movie with a colour palette of bright primaries. The villain is marked by physical defects as well as moral ones. Bond is somehow the hero despite bombing foreign embassies, mixing up CPR and groping, and in the later films trading women's safety for sex. Twice. It’s a tropey world, and the terrible poker fits into it, because the game is just a macguffin to set up stairwell machete fights and poisoned gin cocktails.

The movie would undoubtedly have been better if they had put even a little effort into making the poker good – throw in a clever bluff, a trappy final showdown, and don’t have every hand be a massive cooler – but not that much better.

That said, as a poker movie, it is utterly dreadful. Utterly.

I’d wholeheartedly recommend it. Though why would I bother. You’ve probably already seen it.