Poker Night in America is rolling out a new TV show next month that will showcase celebrities playing poker for cash in a "Hollywood Home Game" of sorts.

The weekly broadcast on CBS Sports Network entitled "Poker Night LIVE" will be filmed at the Gardens Casino in Los Angeles. The first airing is set for March 20 at 10:00 p.m. ET and will be followed by 12 more weeks of action.

A PNIA press release describes the show as a celebrity-centric version of its cash game, but "with lower stakes so the stars can just have fun and let loose." The full line-up of celebrities scheduled to appear on the live TV program has yet to be released, however, Phil Hellmuth has committed to play during the debut episode.

“We’ve been re-imagining TV poker for the past four years, making it more fan friendly with famous faces and a fun atmosphere,” said Todd Anderson, president of PNIA's production company. “We continue to revolutionize how fans can watch poker. Anything can happen on live TV and probably will with a table filled with celebrities."

Another one of those celebrities set to make an appearance is Joe Stapleton, who will put down the PNIA microphone and take a seat at the table. His comedy and humor have been a staple of the PNIA cash game broadcasts and viewers can perhaps expect even more joke making as Stapleton mixes it up with other celebs.

“Stapes is a huge talent, and a blast to play poker with," said the new show's executive producer, Jonnie Kedj. 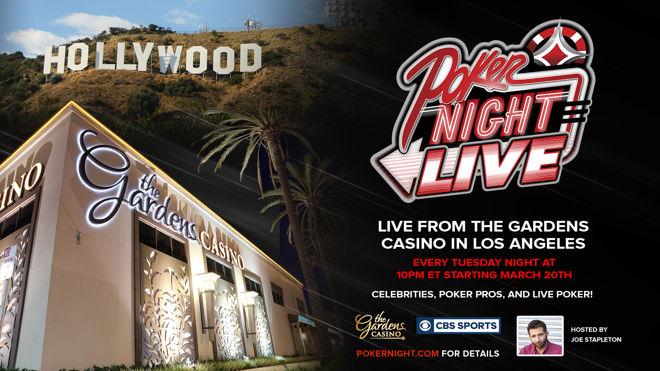 PNIA is in its sixth season of broadcasting poker and boasts almost 200 episodes in its video library. Its programming was picked up by the CBS Sports Network in 2014.

The current PNIA cash games that poker fans are familiar with are streamed on Twitch.tv, but the TV broadcasts are edited. There will be no editing for Poker Night LIVE, with PNIA hoping to extend its reach to viewers who aren't too keen on using streaming platforms.