He is now the Brand Ambassador of Cryptonia Poker, an online poker platform that brings together the thrill of poker with the transparency and value of blockchain and cryptocurrency. 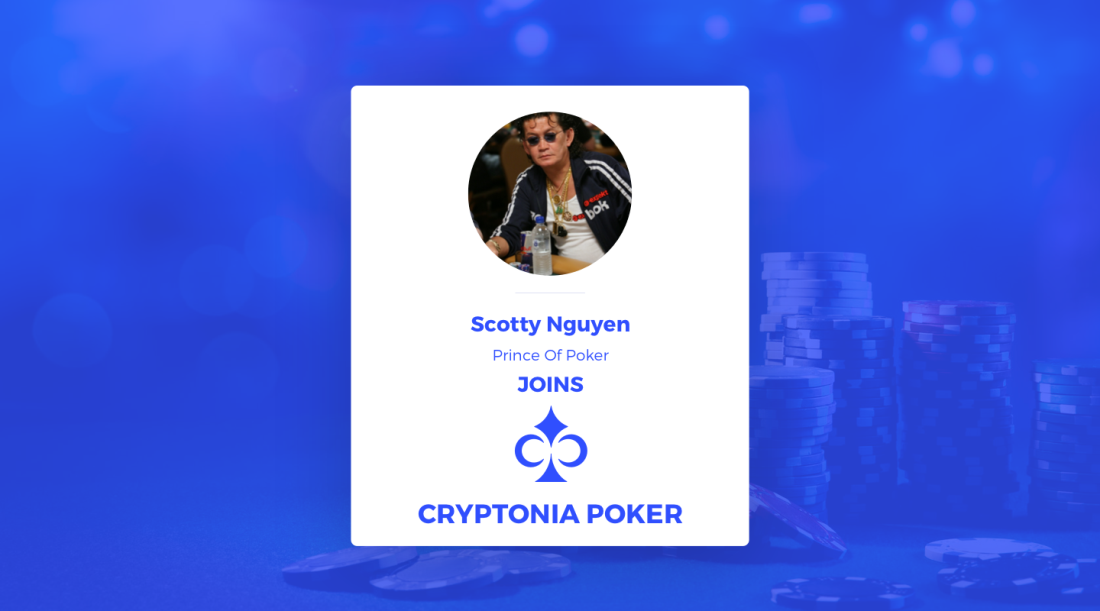 Know more about the prince

Scotty Nguyen is a Vietnamese American professional poker player. Born on October 28, 1962, in Nha Trang, Vietnam. He came to the U.S. at the age of 14.

At 21, he went to a dealer school and got a job at at Harrah’s poker room. From there, he went on to play many legendary games.

One of his most brilliant win was at the 1998 World Series of Poker, when, on the final hand, a full house of eights over nines was dealt on the table. Nguyen famously told his opponent, Kevin McBride:

"You call, it's gonna be all over baby!"

Nguyen beat McBride and took the title, as he had a nine and Jack in his hand.

He split one-third of his WSOP 1998 winning with Mike Matusow, who recognised the star in Scotty, and bankrolled 1/3 of the buy-in, as Scotty was kind of broke before the tournament. Well, the Prince has a way of jumping right back on track, doesn’t he?

He’s know to be a big-hearted and passionate player, and we respect that kind of love for poker.

Know more about Cryptonia Poker and its imminent ICO

Cryptonia Poker is launching its pre-ICO on 10th April and ICOs on 1st May and 1st June, 2018.

During the ICOs, they are offering 750 million Cryptonia tokens, a cryptocurrency used to play poker on their platform.

They are reserving 200 million tokens for tournaments and promotions, and about 50 million for Cryptonia’s team and advisors, for their hard work.

Their platform is powered with blockchain and smart contracts that enable Random Number Generation, swift movement of funds, anonymity of players and safe and secure play rooms.

They will host a tournament after the ICOs, to offer great value to its players through huge jackpots and to encourage new players to join in and make the ecosystem of the platform stronger.

These seem like a sound mix of qualities for a poker platform.

Since Scotty himself is endorsing the online poker brand, it says something about their quality of play.

The Prince of Poker lives for his fans, and once said:

"If you win the Main Event, you live forever, baby.”

We believe so, too, and wish Scotty and Cryptonia many happy Main Events.

A good poker ecosystem and a legendary brand ambassador — that’s a brand worth checking out!

You can join Cryptonia Poker’s ICO to play with the His Highness, Scotty Nguyen!