The Time They Played Blind Man’s Bluff At The WSOP

Does anyone remember what 2004 was like in its coverage of the World Series? No. Me either, so I was pleasantly surprised when the archives turned up this slightly odd, throwback of a clip.

It is one of those weird segments ESPN used to cut into into their WSOP coverage back before the sports network had fully bought the idea that nine people sitting at a table could work as compelling television. With an amusingly forced segue (‘Speaking of the nuts…’) they took a few moments to cut away from the tedious plodding of the high-stakes, all in, million dollar main event, to show us a little bit of what it would be like if six top pros were to play blind man’s bluff.

Blind man’s bluff in this context is not the Dickensian parlour game. Instead, it is a version of texas hold’em where you can see everyone’s hand but your own. A single card version has served for decades as a university drinking game. The simple mechanic of sticking your cards against your forehead with a finger serves to make the game function. 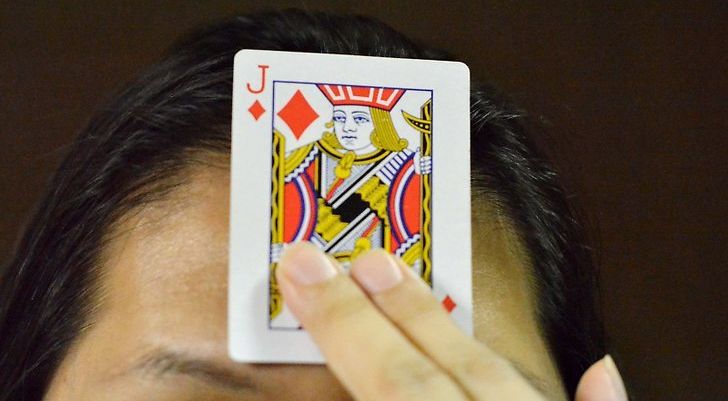 While one assumes the elite field of pros played the tourney all the way to the end, television has only preserved one key hand for posterity. We may never know which of the pros took down the $3,000 dollar prize pool in the end. I wouldn’t want to guess out of the line up of Amir Vahedi, Layne Flack, Scotty Nguyen, Clonie Gowen, Mike ‘the Mouth’ Matusow and Phil Gordon.

After a few gags in which the players talk to camera about how important the event is to them, the action begins with Vahedi shoving his stack into a table of rag hands with the queen of hearts and the jack of hearts pinned to his face.

The table folds round to Matusow, who goes ahead and calls, not realising that his forehead is marked with nothing but a lousy suited nine-deuce. Still, he looks pretty confident as he calls it off as a significant underdog.

Trapped between the two of them, and short of chips (according to Chad and Lon), Phil Gordon decides to punt as well pushing his chips into the middle only to find that he has nothing but an off-suit six and a five. He is in even worse shape than Matusow.

After a 10-9-3 board comes down with two diamonds, Matusow the lead by my count. However, the percentages on the graphic have both Gordon and Vahedi as having 44% equity, leaving Matusow with just 12%. If anyone can explain the working for that one in the comments, then please do.

Matusow’s fortunes are flipped along with the turn card, whcih comes down a king. While Matusow flips out, Gordon begins to count out the five hundred bucks he owes the prize pool, and Vahedi rakes in the pot with his king-high straight. The graphics give Vahedi the tick mark and fade without bothering to show the river.

It’s a whimsical moment in poker history and occasionally – when watching the grim faced coverage of hooded heads, clam-shelled by massive headphones – one does look back at stuff like this with a nostalgia for when poker players took themselves a little less seriously.

Besides, I can’t help wondering if Phil Gordon came back next year to win the Blind Man’s Bluff bracelet, just like he’d always hoped.