It took just 58 hands at the final table for the rest of the field to go to the butcher leaving Dmitry Yurasov with the biggest cut of the prize pool and all of the chips.

Hand #28: Albert Daher took 5th for $138,644 the very next hand when his ran his flush at full speed into the brick walls of Yurasov’s full-house. At this point Dmitry’s lead was beginning to look substantial.

Hand #36:Artem Metalidi raced pocket sevens against Yurasov’s A-Q a few hands later. Getting it all in preflop with his stack of 1,680,000. Yurasov hit a queen first card off the deck and took the hand, sending Metalidi out in 4th for $204,128.

Tommy completed his small blind on the button and was raised to 400,000. Chen called with Qs-9s and when to the flop, which came down Q-T-8. A dream flop for Chen’s hand.

Yurasov c-bet 475,000 and Chen matched it. Yurasov fired again on the turn of a 5 and Chen moved in over the top of him for 2,750,000. Yurasov snap called and showed pocket aces. Chen needed a nine, jack or queen on the river. 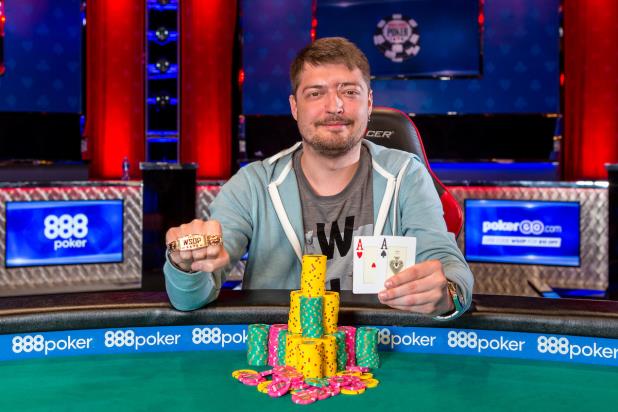 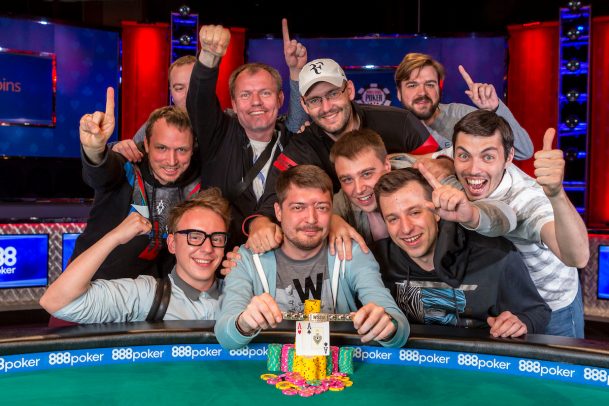 Kick off To FT in Five Levels

Day 3 started at 14:00 PST with a rogues gallery of bracelet winners, card spinners, and wolves in wolves clothing. Just 24 players came back to room with chips after day 3 and it didn’t take long – just under six blind levels – to send the lot of them to the rail. 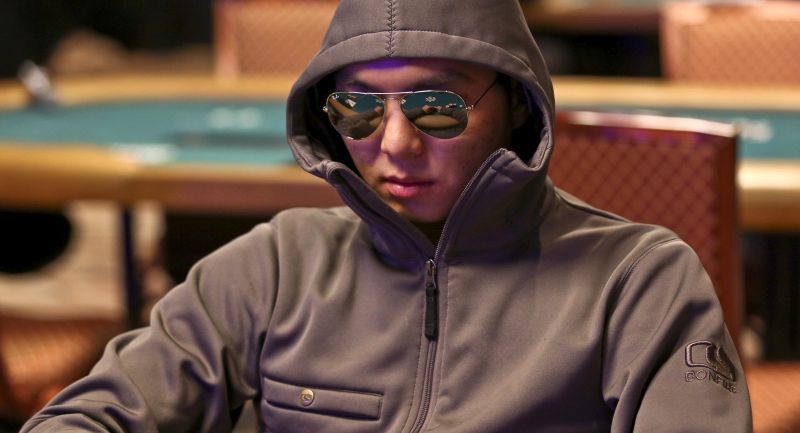 It was a big day at the series. Day two of the $10,000 6-Handed Championship was a hugely fun day of star after star going up against one another. One mad table of Charlie Carrel, Sam Stein, Joseph Elpayaa, Dario Sammartino, Anthony Gregg and Joe Kuether set the tone for the day.

Elio Fox even managed to bust on the very last hand of the day.

Down to Five Tables

Albert Daher led the field at that point with the only million chip stack.

A few hands after the break though, and now we are down to just 28 players on five tables.

There were plenty of shenanigans including Dan Smith, trying to squeeze $100 out of Eric Wasserson in exchange for showing his hand.

It took about six hours to get down to the bubble of 51 players. Along the way we had scenarios where Dario Samartino busted Tony Gregg, then went on to tangle with Charlie Carrel, this is the kind of event we are playing: hammerhead versus great white at every table.

By the time we got down to the bubble, no one wanted out, and no one was disappointed. It took damn near an hour of hand-for-hand to bust that last pesky player.

On the button Lyle Vincent looked down and saw A-J off-suit and put his stack in. With cards face up, the dealer put out the K-T-2-3-3 on the board giving Mandic the hand. A eyeball of the stacks showed Lyle Vincent was massively covered and he headed to the rail with nothing but a table’s worth of handshakes.

Everyone still in the event is now guaranteed $15,091 for a min-cash.

We lost a few big names over the course of the first two blind levels, but none as big as Phil Hellmuth Jr who gave a load of Hollywood to Albert Daher shoved the river on what might have been a bluff:

“You’re just sitting there waiting to give your chips to me. Wow, king-queen of clubs drawing dead. I’m the best player in the world – people just love to give their chips to me in these things.”

Then he folded, giving his chips to Daher and leaving him with just 67,000 behind.

Not long after he headed for the door with the green signs above them. Sorel Mizzi and Jonathan Concepcion followed in the next few hands so at least he’ll have someone to tell his bad beats stories too.

Perhaps he should take something more like Anatoly Filatov’s attitude:

At The Start of Day Two

Here we are around the halfway point of the series, it’s been a lot of fun. We’ve had worries about marked cards, Phil Hellmuth called an MMA fighter a ‘moronic motherfucker’ and survived, and there’s been so many bracelet sweats that it’s almost time for my monthly shower just three weeks in.

But today is not about the series as a whole, or the skewed Player of the Year standings, or even about Patrik Antonius’ dreamy eyes and where they’ve been all series.

Today is just about grinding the $10,000 6-max field down to something approaching a final table.

129 players set their alarm clocks for early afternoon in order to make the 14:00 PST start.

Blinds are starting out at 1,200-2,400 with a 400 ante (there appears to be a discrepancy between the structure put out by the WSOP and the one they are actually playing) and should go on for ten levels today until the end of the 8,000-16,000 level.

Every table is a who’s who of people you don’t want to have to play against when you’ve got $10,000 invested and only 50 people in the room are getting paid.

Jeff Gross is back in the pack today and had the following to say about his performance on Day 1:

Day 1 Ends With Grayson Ramage in the Chip Lead

They are led by Grayson Ramage with 527,700 in chips, and have been for most of the second half of the day. He is trailed in second place by Sam Stein with 364,500 and two time bracelet winner Cliff Josephy in third with 330,300.

In the last few minutes of registration Sorel Mizzi, Chris “Jesus” Ferguson, Brian Rast and Phil Hellmuth joined the field, along with Ben Yu who had just run super deep in the $100,000 Limit Hold’em event, coming in on the last break with blinds going up to level 9: 600-1,200 with a 200 ante.

Whoever comes in 51st will be the bubble boy/girl.

Dario Sammartino got a five bet jam in against Brandon Adams, and Daniel Negreanu was looking for Phil Hellmuth to give him a hard time. Luckily for Phil, Negreanu went to the rail before the Poker Brat had even turned up to buy in.

Jason Mercier, entered late then was asked to leave by the cards; along with Ryan Reiss, Chance Kornuth and Garret Greer. Along with a slew of other big name players and bracelet winners.

By ten-past eleven even Martin Kozlov, the defending champ, was gone after getting his chips in on the river against Matt O’Donnell’s set of aces.

Christopher Kruk was the first in the field to go to the rail. Just after the blind level went up to 100-200 with a 25 ante, he picked up pocket queens getting most of the money in on the river when the board came out Tc-7c-3x-Jc-Kx.

Justin Adams shoved for about 28,000 into a 35,000 pot and Kruk called for what was left of his stack. Adams showed 5c-4c to take the pot with a low flush and Kruk became today’s first casualty.

Last year’s winner was Martin Kozlov who outlasted a field of 294 players to drag in a pile of cash $665,709-high. He’ll no doubt be back to defend his title against all comers.

There seems a good chance of being rather more of those comers this year, the large $10,000 buy-in events seem to be doing better than last year, where most of the other events are pulling in smaller numbers of punters.

Players begin Event #42 the $10,000 No-Limit Hold’em 6-Handed Championship with 50,000 in chips and blinds starting at 100-200 and no ante. Blinds go up every hour with a twenty minute break every two blind levels.

Let’s go to the tables.

You can watch Martin Kozlov’s win last year below: