In the poker world you’re only as good as your word, and CoinPoker’s promise to “deliver high stakes tournaments” has been kept as they announce their ‘Crypto Series of Poker’ (CSOP) festival – a massive 10million CHP prizefund spread across 17 events due to kick off at the end of May.

CoinPoker have been at the forefront of the burgeoning crypto-poker market, and as they near the end of their Beta phase it’s time to make good on their pre-ICO pledge to use a chunk of the funds gathered from investors and players alike – the Crypto Series of Poker offering up its opening event for free to new players.

“This series is something we’re excited to give back to the community we already have, and to attract interested players by allowing to join the first event for free,” CoinPoker said this week, the team looking forward to the inaugural May 27th event and the Main Event a week later on the 3rd of June, where 2.5 million CHP are up for grabs and which includes the ‘TonyG 20k CHP bounty’.

The CSOP will feature a host of events at different buy-ins, all the way from the 250 CHP Turbo (Unlimited Rebuys) opener – free to new players on the site - to the 4000CHP buy-in Super Knockout.

The big finale on June 3rd sees the value-added duo of the Mini Main Event (2.5k CHP buy-in with 1million CHP added to the prizefund and then the biggie, as mentioned the CSOP Main Event which will set you back 5000 CHP to enter but will have a phenomenal 2,500,000 CHP extra up for grabs.

The in-game currency CHP, in case you still aren’t sure what it is, is a new cryptocurrency dedicated for poker with its nickname CHiPs, which can be cashed out back to traditional currencies whenever you want.

The site’s creators explain that:

"You can buy the CHP cryptocurrency online no matter which geographic region you reside in (perfect for those in hitherto closed markets) and the speed of processing goes from slooooow to instantaneous - bypassing banks, e-wallets and other third-party brokers who create distrust in the poker community and cause payment delays." 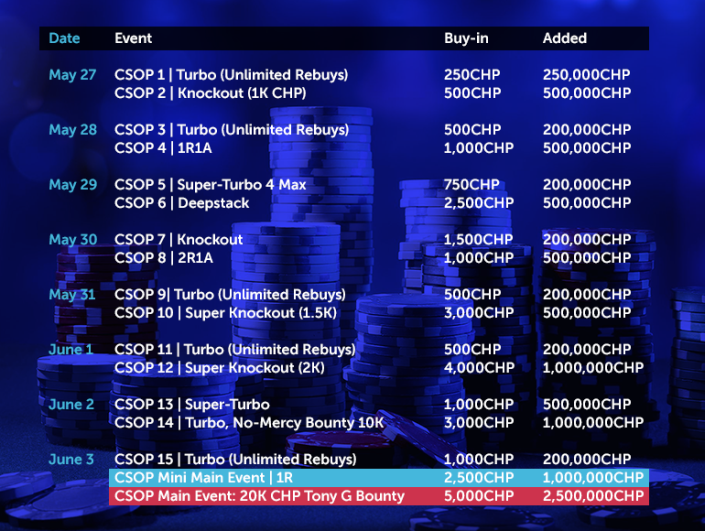 With a mix of experts in all the fields required to bring you a leading crypto-poker site, you’ll definitely recognise some of the faces among CoinPoker’s team, Anatanas ‘TonyG’ Guoga joined by Canadian poker queen Isabelle Mercier in the role of Chief Community Manager, with industry stalwart Michael Josem providing the safest of hands as Head of Security

More information about the CSOP can be found here.