One apology and the surprise appearance of Chris ‘Jesus’ Ferguson later, and it was the turn of Howard ‘The Professor’ Lederer to step into the Rio in Las Vegas, yesterday, for the World Series of Poker.

The former Full Tilt poker founder and director took his seat in the $10,000 NL 2-7 single draw championship event – his first WSOP appearance since 2010 – and refused to answer questions about his involvement in the 2011 Full Tilt scandal which saw some $400million of player funds disappear into a black hole.

Kevin Mathers, the WSOP ‘Twitter Czar’, tweeted “Howard Lederer just registered for the $10,000 NL 2-7” and thereby opened a whole new can of worms for the followers and fans of the game, who are still reeling at Ferguson’s "I'm just here to play poker" re-appearance last weekend.

Lederer echoed his former colleague’s reluctance to speak publicly about his role in the disastrous post-Black Friday scandal which engulfed Full Tilt, replying only "No, thanks, I've made my statement," when asked to comment.

His statement of 3 weeks ago, released to the public by Daniel Negreanu on his website, began: “I am writing to apologize to everyone in the poker community, especially to all the players who had money on Full Tilt Poker on April 15, 2011.”

“When Full Tilt Poker closed in 2011, there was a shortfall in funds, a distressed sale to recover those funds, and a long delay in repaying players. Throughout this period, there was little explanation for the delay, and no apology. Players felt lied to. They trusted the site, and they trusted me, and I didn’t live up to that trust.”

In a move thousands of players had been waiting 5 long years for, Lederer stated: “ I take full responsibility for Full Tilt’s failure to protect player deposits leading up to Black Friday.”

His statement was seen by many as a pre-cursor to his WSOP return this year, but first it was Chris ‘Jesus’ Ferguson who surprised the poker world by turning up at the Rio All-Suite Hotel and Casino last week – sparking anger with his refusal to comment on his own part in the debacle.

Daniel Negreanu was the first of the big-names to tweet about his appearance: “Chris Ferguson returns to WSOP issuing no apologies, no remorse, as if nothing happened. Feels like a giant slap in the face to players,” he posted on the day that Ferguson cashed for the first time since 2010.

Negreanu followed up his first tweet by calling out the 2000 Main Event champion, who barely spoke to reporters in the Aria Casino. "I'm just here to play poker" -Ferguson's only comment - dismisses the damage he caused the poker community while hiding under the covers,” stated Negreanu – and few of his followers online disagreed. 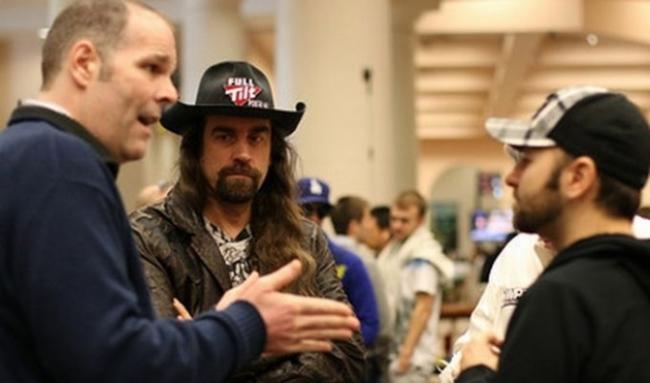 Ferguson has since gone deep in 2 further events, and although a player backlash has been called for by many online posters, Ferguson has faced very little in the way of personal abuse so far.

Six-time WSOP bracelet winner Layne ‘Back-to-Back’ Flack, stated of Ferguson’s return: "People realize they don't know the whole story and don't know what to say or what to think," he said.

Expressing a viewpoint which the vast majority of poker players are likely to disagree with, 6-times WSOP bracelet winner Flack added, " Chris Ferguson has done a lot of great things for poker. He's a standup guy, and all the decisions made by Full Tilt Poker don't fall on him.”

I firmly believe he didn't take one dime from anybody. It's just not in his nature. It's more in his nature to give everything to everybody, than take anything from anybody, and that's a fact."

Mike Sexton followed up both Negreanu’s and Flack’s public statements by saying: “I think Chris should tell the story to be honest.”

A friend of Ferguson for many years, Sexton apparently echoed the thoughts of many old-school players, including Phil Hellmuth according to ‘at-the-table’ chat this week.

"I see both sides of the coin,” continued Sexton. “A lot of old players are fond of Chris and like him as a person but for what he did, it's difficult for a lot of guys to swallow. Should they let him come back and play? It's okay with me, but I can see where people would object to it."

Whether Howard Lederer’s re-appearance will tip the scales and witness a player backlash or not is unclear, but initial reports seem to suggest that the majority of the thousands playing this year’s WSOP are either unwilling to confront the pair publicly, or unaware of the background to the entire sorry saga.

Although many players were re-imbursed years later after PokerStars repaid much of the debt, a condition of their buy-over of the Full Tilt brand, some 5% of players will still receive nothing – and many had their poker careers and dreams shattered or put on hold because of the unholy mess caused by the ‘mis-management’ by Lederer, Ferguson and others, notably Rafe Furst and CEO Ray Bitar.