Molly’s Game, the movie which charts the life of Molly Bloom and her $multi-million underground poker games, is well on its way to becoming the biggest-grossing poker movie of all time – pulling in more than double the box office money that cult film Rounders did, with $53,398,240 in ticket sales so far.

The sensational tale of former Olympic skier Bloom’s rise and fall hit the theaters on Christmas Day - with it’s full release worldwide just after New Year – and so far it has brought in $28,780,744 in the US and another $24,617,496 from the rest of the world, easily making back it’s $30million budget and then some.

Rounders, starring Matt Damon, Edward Norton and John Malkovich, by comparison took $22,921,898 at the US box office – and didn’t have an international release – but of course it has become the bible of poker movies for millions of fans, lines quoted at will in almost every casino, including the infamous Teddy KGB line ‘Pay that man his money!’

Although it still has a fair way to go, Molly’s Game – with director Aaron Sorkin and Molly actress Jessica Chastain picking up Oscars for Best Screenplay (2) and Best Performance by an Actress respectively – may well catch the 1994 Mel Gibson movie The Maverick, which grossed $101.63million in the US and $81,383,965 from worldwide sales.

First it will have to overtake one of the other highly successful poker movies, Runner, Runner. The 2013 movie starring Ben Affleck, Justin Timberlake and Gemma Arterton had a great run, grossing over $60million in total – but critics weren’t nearly as enthralled by it as they were with Molly’s Game…

The comparison between the four movies box office earnings, thanks to TheNumbers.com, is quite revealing… 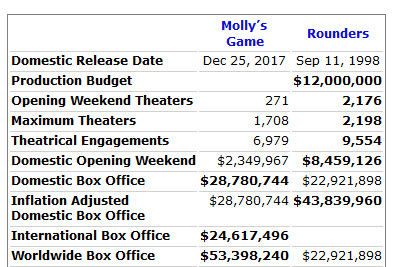 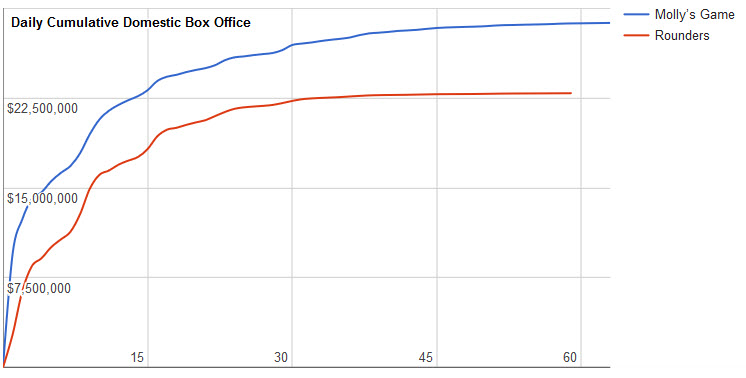