Partypoker Return to Sochi for the EAPT Grand Final

Less than two weeks remains until the start of the partypoker-sponsored EAPT Grand Final, the Eurasian tour returning to the delights of Sochi, which will once again see the top players from Russia do battle with their neighbours and globe-trotting visitors in the ₽50,000,000 ($750,414) guaranteed season-ending Main Event.

Kicking off on the 19th October and running for 11 days, the EAPT Grand Final will see 17 Championship events being held at Russia’s biggest and most-famous casino, Sochi Casino’s poker room run by Artur Voskanyan and having already hosted many of the biggest tours in the world.

Partypoker, as has become customary with their excellently-received LIVE offerings, are offering some amazing deals and prizes as part of their involvement, and here’s the run-down on the most attractive of them…

The ‘Holy Grail’ of any poker player’s journey, becoming a pro requires a lot of money and support, and partypoker’s 1-year, $50,000 sponsorship deal deals with that in one fell swoop.

Win the EAPT Grand Final Main Event and it’s yours, providing you have bought in using the partypoker currency – PP LIVE dollars – and you have to be among the first 100 players to do so, 81 spots still remaining at last count though they are likely to go fast.

The $50,000 can be used at any of the partypoker LIVE Events over the next 12 months – the biggest bonus being that you get to keep 100% of anything you win – so no backers or stakers taking a cut, it’s all yours.

The PP LIVE Dollars currency has proved so popular partly because it can be won on the siteand then used not only for tournament buy-ins, but also to pay for accommodation, visas, travel and host of other necessary expenses. 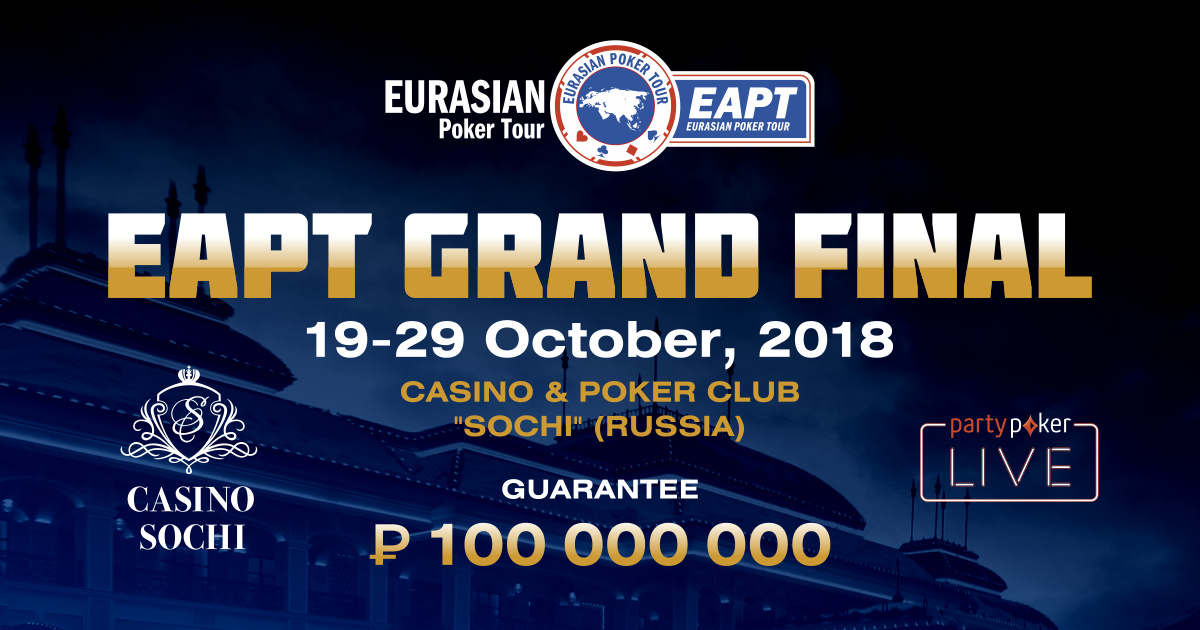 It all starts with the Russian Poker Championships, the $450 buy-in event number one on the list always a well-attended opener, and followed by the EAPT High Roller, a $2k buy-in promising rich rewards. October 22nd sees the Main Event start to grind its gears, $900+90 buy-in and a title most certainly worth fighting for, online and live satellites guaranteeing a big field and even bigger prizefund.

As ever, partypoker are offering a sweet little bonus if you can guess just how many players turn out for the Main Event, 1,000 PP LIVE Dollars yours to do with as you please if you get closest to the correct number. To submit a guess, simply click here and enter your guess with your country of residence.

For new accounts, those opened since 6th of March 2018, you can win your way into the EAPT Grand Final Sochi line-up by taking advantage of the free $22 satellite ticket on offer.

Simply join My partypoker LIVE and link it to your partypoker.com account and you’ll get a free $22 partypoker LIVE Satellite ticket, usually within 72 hours, giving you plenty of time to run it up to a Sochi adventure.