Production of the highly-anticipated Russell Crowe movie, Poker Face, has been shut down after one of the crew contracted Covid-19, with a second case under investigation, Crowe tweeting out the news...

Crowe is the director and star of the psychological thriller currently being filmed in Sydney, New South Wales, the Australian city itself in a strict lockdown after a surge in coronavirus cases earlier this summer.

The Hollywood A-lister added several tweets explaining the circumstances of the recent problems:

“For the safety of cast and crew and the wider community, the production has been immediately paused and everyone instructed to isolate whilst the situation is looked into. We have followed strict protocols with cast and crew being tested 3 times a week for the past 11+ weeks.
The crew have been masked on set the whole time except for 3 individuals with medical exemptions. We feel for the crew members involved, like all the people on this show they are both very committed team players and diligent in their approach to their work responsibilities.”

Despite the general lockdown rules, filming had been taking place on locations around Sydney and at the city’s Fox Studios, which has aroused some negativity.

“Why was this happening when the city is in lockdown. Is film making an essential service. Sends a bad message to the people whose businesses are crashing because of lockdown. Hard working Aussie’s with no pay packet Different rules for the rich and famous it seems :(.”

Local Member of Parliament, Gareth Ward, had earlier tweeted out opposition to the movie shoot going ahead:

“This makes a total mockery of the Public Health Orders. People can’t see family and friends, funerals limited to 10, no cases in Shellharbour but still locked down but apparently ‘A-listers’ producing movies is essential?” 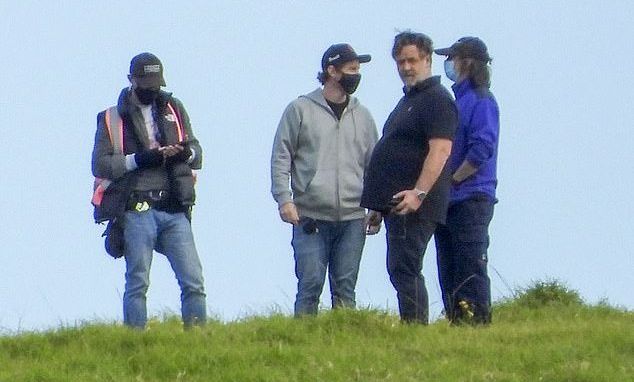 For those who haven’t seen the plot of the latest movie to use poker as a central theme, Crowe plays a tech billionaire who invites a group of childhood friends to his estate in Miami for a high-stakes poker game.

Things are not all that they seem, however, as Crowe’s character, Jake, has planned retribution on his former friends, concocting “an elaborate scheme” centred around the poker game.

However, a “dangerous home invader” – a murderer and arsonist – throws Jake’s dastardly plans into disarray and soon the entire group are fighting for their lives.

According to Variety magazine, appearing alongside Crowe in Poker Face are Liam Hemsworth, Elsa Pataky and Wu-Tang Clan frontman RZA, described as “a long-time friend of Crowe’s”.