Selbst, Tilly and Foxen Among Magnificent Seven Announced for Women in Poker Hall of Fame Final

The seven female players who will contest the final voting round for induction into the Women in Poker Hall of Fame have been announced, with Jennifer Tilly, Vanessa Selbst, and Kristen Bicknell Foxen among them.

Kara Scott, Angelica Hael, Liv Boeree and Terry King round out the magnificent 7 shortlisted for inclusion in the Women in Poker Hall of Fame (WiPHoF) as 2022 inductees.

A panel consisting of living members of the WiPHoF, media and industry representatives, as well as a collective public vote, will decide on which of these players will join the likes of Cyndy Violette, Jennifer Harman, Victoria Coren-Mitchell and Maria Ho.

Women in Poker Hall of Fame was founded on May 1, 2008 by Lupe Soto, a poker enthusiast, with the objective to give honor and prominence to women in the game. Soto herself was inducted into the WiPHoF along with Ho in 2018, bringing the total to 21 members. 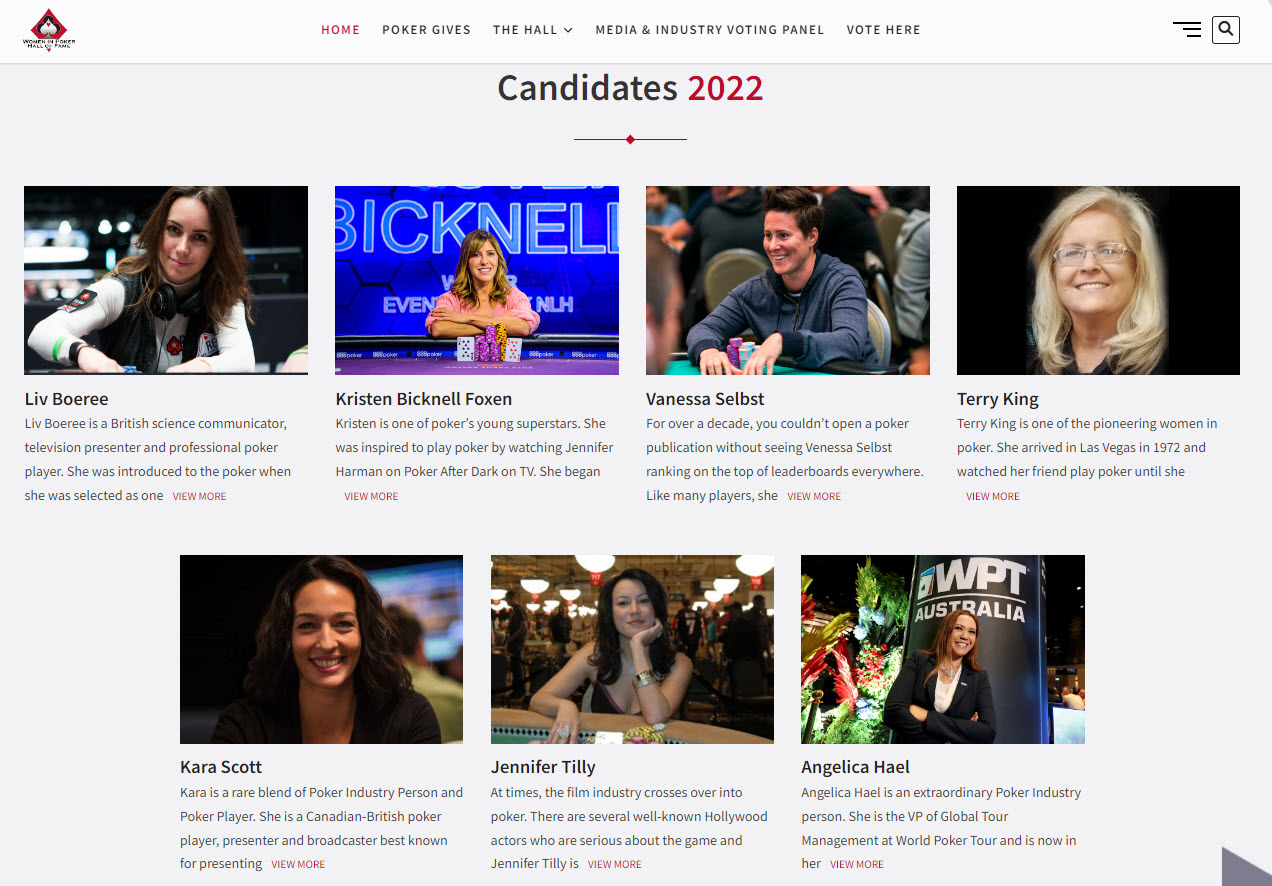 Of this year’s nominees, whittled down from an original 54 to just seven, Bicknell-Foxen, Boeree, Selbst and Tilly will all be familiar names to regular poker players.

The first three of that famous quartet are among the top ten female tournament money-winners of all-time (3rd, 7th and 1st respectively), with actress Tilly a regular in the old-school big televised cash games.

Kara Scott will also be well-known to most, her TV anchor work for the WSOP on ESPN, and PokerGO duties making the 888Poker ambassador one of the industry’s best-established and most popular females.

Terry King has been part of the poker scene in the US for almost five decades, winning the 1978 WSOP Ladies’ event bracelet and was one of the first women to deal the Main Event.

She went on to become a driving force in California poker and is regarded as an important poker historian, sharing her knowledge and experience in a 4000-member Facebook group.

Angelica Hael, an Australian, started out as a dealer and worked her way up the poker ladder to her present position as VP of Global Tour Management at World Poker Tour overseeing the overall management of World Poker Tour and WPT-branded events.

She was awarded the GPI Industry Person of the Year award in 2018 not only for her work in poker, but also for creating the WPT Women’s Poker Initiative, which seeks to bridge the gender gap and make poker more attractive to women.

The WiPHoF eligibility criteria are as follows:

Public voting ends on October 14th and the seven finalists will find out in November if they have made the final two or three to be inducted from the voting process, which sees prominent poker journalists Haley Hintze and Jennifer Newell among the panelists.

The induction ceremony will be held on December 14th at the PokerGO Studio in Las Vegas’ Aria Casino and Hotel.