Leon Tsoukernik, the multi-millionaire owner of the King’s Casino, took down the last-ever EPT Super High Roller with a commanding display as he bet, bluffed and bullied his way past a stellar field to the €741,100 first prize and the trophy.

As the Main Event kicked off in Prague’s Hilton Hotel and Casino with day 1a, the big boys of the €50K nosebleed stakes returned for their own final table - the lucky six who ponied up the massive buy-in were guaranteed a €150K payday – including Finland’s short-stacked but hugely experienced Juha Helppi, English millionaire businessman Paul Newey and his countryman, the talkative and multi-colored festooned Charlie Carrel. 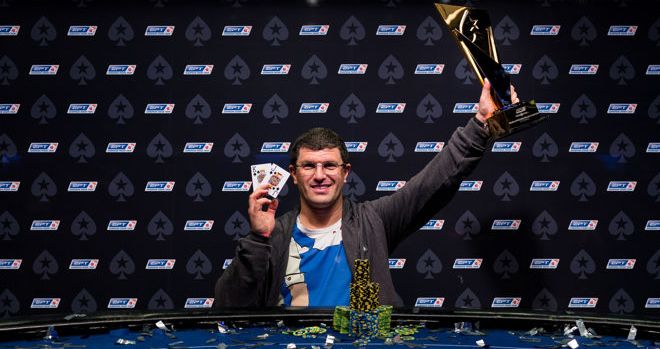 It was a one-man show for the most part, however, as Tsoukernik (who apparently won almost €300K in a cash game during last week’s WPT) laid waste to his talented colleagues in a friendly and lively final table.

With Germany’s Julian Thomas falling early, Newey struggling to find a spot with his short-stack and Russia’s ‘Jim Carrey facial expression-a-like’ Viacheslav Buldygin hitting the rails, it seemed almost certain that Tsoukernik and Carrel would face-off heads-up for the lion’s share of the 2,400,000 prizefund, confirmed when Helpii bust-out in 3rd and headed straight for his seat in the Main Event.

As the PokerStars blog revealed:

"Less than an hour into their acquaintance, they exchanged heated words over a misunderstanding over an alleged angle shoot. (There was no guilty party.) But since then they played almost non-stop against one another, earning each other's respect. Carrel knocked out Tsoukernik on Day 1, and Tsoukernik bought back in, landing in the exact seat he had left. Tsoukernik then paid €600 for a bottle of whisky and they buried the hatchet over the brown stuff.”

Both men had bought in for two €50K bullets, and Tsoukernik seemed capable of dodging all of Carrel’s subsequent bullets heads-up, the Englishman’s KK and big Ace hands unable to bridge the 8 or 9-1 chip lead the Czech businessman held.

When the end came, Carrel’s AK seemed destined to finally double-up against the KJ of Tsoukernik, but the flop brought the King’s Casino man a jack and a flush draw, the river K sealing the Englishman’s fate. A thrilling end to a fantastically-enjoyable battle and a fitting finale to the EPT’s super-high-rolling adventures over the years.

The Most Dangerous Woman in PokerPoker Gossip & Opinion