He’s famous in the poker world for his massive swings at the highest stakes of the online cash games, but Viktor ‘Isildur1’ Blom has also proven over the years that he’s no mean player when it comes to tournament poker – a fact he has backed up once again with a $63,304 scoop on PokerStars yesterday.

The Swedish maestro saw off a field of 156 other hopefuls in the $2100 buy-in NLHE tourney - part of the 'Winter Series' which PokerStars is currently running - to grab the lion’s share of the $314,000 prizepool and take his online tournament earnings over the $1million mark this year on PokerStars alone.

It’s been a busy Christmas period for Blom, yesterday’s win coming on the back of last week’s ’11-minute double’ which saw him take down two tournaments just eleven minutes apart, while final tabling a third!

As Highstakesdb.com reported, he won the Omania $530 High Roller and then ‘just 11 minutes later … Isildur1 had won his second big tournament of the night, this time the $2,100 Sunday High Roller’ which ‘netted him first place prize money of $46,721, just three weeks after he won the same event for $63,842.’

His online tournament biggest score was a $1,096,20 payday when he overcame a field of 580 players to scoop the SCOOP, the 2013 PokerStars Spring Championship of Online Poker Main Event High seeing him defeat Noah Boeken heads-up.

Keeping track of the Swede’s poker exploits is akin to tailing the elusive Scarlet Pimpernel at times, his mix of cash, tournaments and live play meaning you’re never quite sure where he’ll pop up next, so Highstakesdb.com and the Hendon Mob website are a godsend when it comes to following Isildur’s exploits, the former sharing his biggest pots and latest opponents as well as detailed accounts of his recent play.

In September they shared his high stakes battle with another legend of the nosebleeds, Ben ‘CowEyed’ Tollerene as they clashed heads-up for the $25,500buy-in Powerfest Super High Roller event on PartyPoker – the Swede coming off second best but still walking away with $529,272 when his final hand queen-high bluff walked straight into a boat! 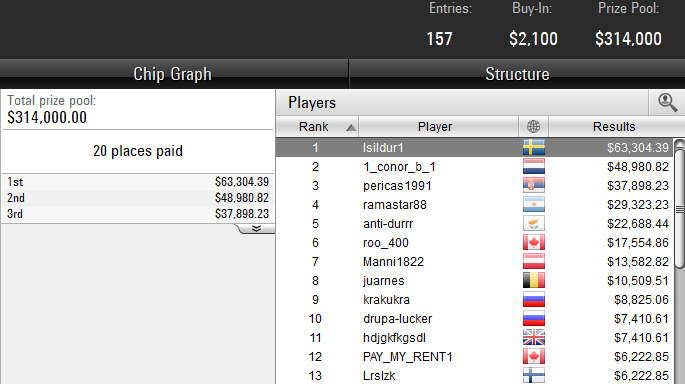