Barely a week passes without an underground poker game or gambling ring being busted somewhere in the world, and this week it’s the rather unexpected town of Surat in India which has hit the headlines, 32 youths arrested in a crackdown in the upmarket Vesu district.

Two young men, Hetal Desai and Jaideep Dawar, were named as the two main operators of the ‘gambling den’  in their customized shop in a commercial complex, with many of their poker patrons ‘businessmen, while others are offspring of affluent business families’ according to newspaper reports. 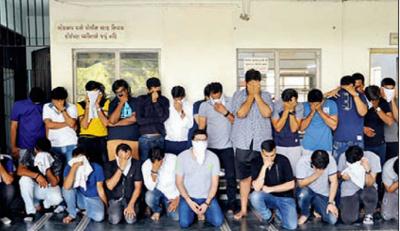 The status of poker in India mirrors that of the USA, with only 3 states recognizing the game as skill-based while others are in the process of legislating either for or against the game.

There are an estimated 50,000 players on India-specific poker platforms, according to Rajat Agarwal, cofounder of Spartan Poker who says of his industry:

“Online poker is a profit-making model.”

Reports from 2015 classed its net worth at about $110-120 million, and the country has seen slow but steady investment in poker start-ups, though the regulation is heavy.

Land-based casinos are rare in India, hence the eruption of underground poker games and illegal gambling houses. There are two casinos in the state of Sikkim and a total of 10 in Goa - six land-based along with four floating casinos on the Mandovi River.

According to Jay Sayta, an expert in Indian gambling laws:

“It is an obscure area which people like to wish away. However there is considerable interest in gambling, especially in a country like India which loves cricket (and betting on it comes as a logical extension) and entertainment/thrills.”

Along with many others on the online forums which proliferate in India, Sayta has urged the government to introduce ‘legal but regulated gambling in India’ to ‘bring the gambling economy out of the grip of mafia and underground dons’.

It’s a little too late for the 32 accused in the Surat bust, however, with heavy fines and up to 3 months imprisonment the possible penalty for their violations.

Struggles Of A Poker Vlogger In SlovakiaPoker Gossip & Opinion