Further details have emerged from last week’s police raid on the Watauga Social Lounge Poker Club in Fort Worth, Texas, revealing that more than $200,000 in cash was seized and 49 players were issued with fines of $360...

The raid on the cardroom saw the Game Room Enforcement Unit of the Tarrant County Sheriff’s Office and Drug Enforcement Agency officers, as well as local police, arrest 10 members of management and staff.

A search warrant, issued by Tarrant County Judge, George Gallagher the previous Friday, authorised “the search of a gambling establishment”.

It allowed the seizure of “currency, gambling proceeds, financial instruments, and or other items of value…relating to obtaining, transferring, secreting, or spending large sums of money made from engaging in specified unlawful activities.”

The cardroom’s tables, chairs, chips, cards and anything related to possible gambling was loaded onto a police truck and hauled away, as players were questioned and fined.

All this occurred in the middle of the Fall Classic Poker Tournament, a $420 buy-in, $100k GTD event that produced a prizepool of $132,840. That money, and more, was confiscated by the police. 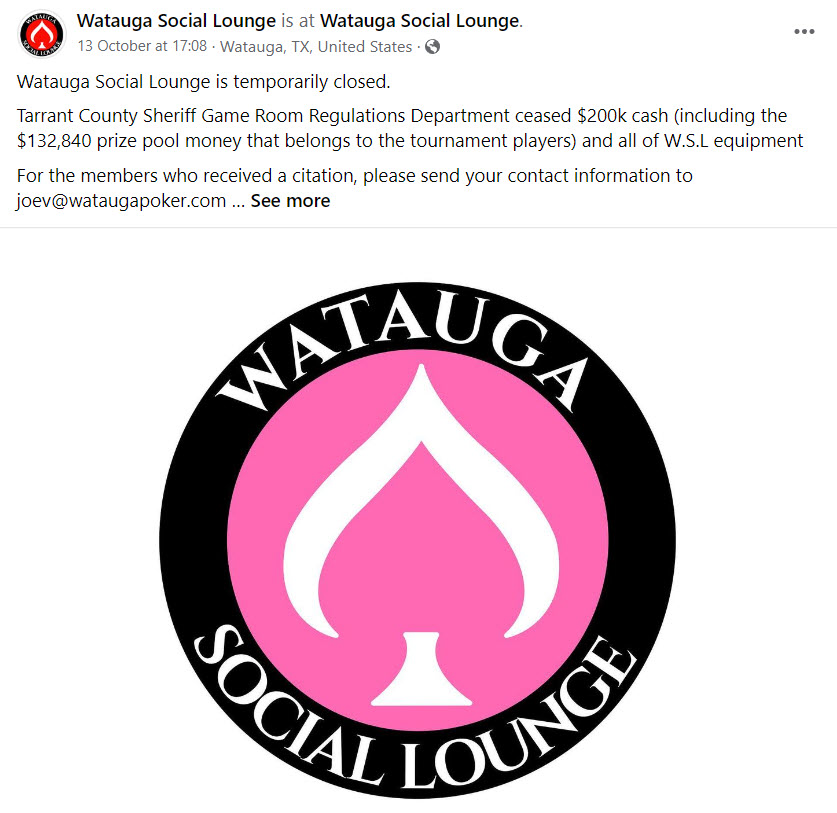 “For the members who received a citation, please send your contact information to joev@wataugapoker.com.

“We have a meeting on Monday with an attorney for legal representation for all tournament players who receive a citation from the Tarrant County sheriff’s department, and to get back the $132,840 that belongs to the tournament players.”

The club, which only opened in January of this year with the Mayor of Watauga in attendance for the ribbon-cutting ceremony, added: “We sincerely apologize for any inconvenience this has caused to our members, to our staff, to the poker community and to the city of Watauga. Thank You for the love and support we have been given. We hope to open back up soon.”

The Lone Star state’s cardrooms and their frequent battles with the authorities have dominated the news for months now, with the they operate under being attacked in certain areas.

The Top Shelf Poker Room in Flint, just outside the town of Tyler, about 100 miles east of Dallas, was similarly raided in March of this year.

Police seized “gambling paraphernalia, US currency, financial ledgers as well as other documents and electronics believed to be associated with the promotion of gambling.”

Sheriff Larry Smith claimed that some of the investigators had been working undercover at the cardroom and they had “probable cause” to believe illegal gambling was taking place on the premises.

An earlier pair of raids didn’t work out quite so well for the Texan authorities in Houston, when multiple arrests at the Post Oak Poker Club and the Prime Social Poker Room backfired.

All the charges were later dropped when it was discovered that District Attorney Kim Ogg’s own consultant had scammed the two poker clubs out of $250,000.