Back in early June during the $111,111 High Roller for One Drop (Event #6) when Doug Polk and Bertrand 'ElkY' Grospellier were the final two players remaining, the pair made a prop bet.

It was a rather mild wager as far as prop bets go. There would be no lunging or boob jobs involved. The loser wouldn't have to gain or lose a certain amount of weight within a specified amount of time.

Instead, the runner-up finisher would have to copy the hairstyle of the other. Both players, of course, are recognized for the individuality of their respective coifs - ElkY for sporting his platinum blonde top and Polk for his faux hawk. 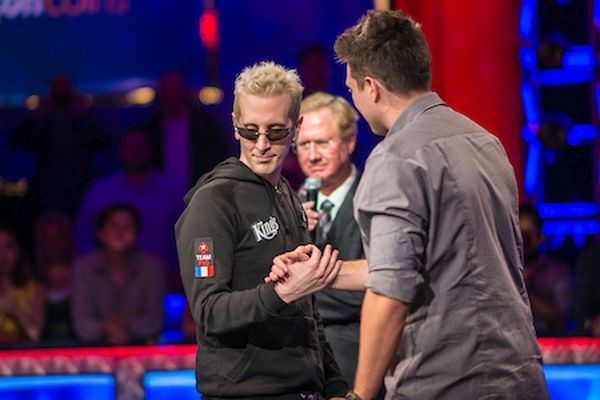 Props to the Winner

Doug went on to win the tournament and $3,686,865 in prize money when he hit two pair while holding queen-high, trouncing the ace-rag of France's top player on the all-time money list. Grospellier took home $2,278,657 for finishing 2nd, but also had to make an appointment with his hair stylist.

ElkY made good on the prop bet recently, posting a photo on his Twitter account for all  the world to see.

Not a bad look for the renowned StarCraft gamer and Team PokerStars Pro. Unfortunately, the new 'do didn't bring ElkY any luck in the Main Event, as his A-Q fell short versus an opponent's big slick, sending the 36-year-old to the rail.

Polk, meanwhile, has a good-sized stack of 287,500 heading into Day 3 of WSOP ME action. The Upswing Poker co-founder has not fared too well in prior Main Events, but is hoping that will change this year.

Check out Doug's most recent vlog below where he talks about Main Event happenings thus far, as well as what to expect going forward.

Massage Brings Relief and Luck at the WSOPPoker Gossip & Opinion