John Hesp came to the small screens on ESPN, as the charming, patchwork quilt wearing caravan salesman from up Bridlington way who final tabled both the 2017 WSOP Main Event and our hearts.

Marc Ambrose is the guy who, with his production partner Niall Perrett, will be bringing Hesp to the big screen. 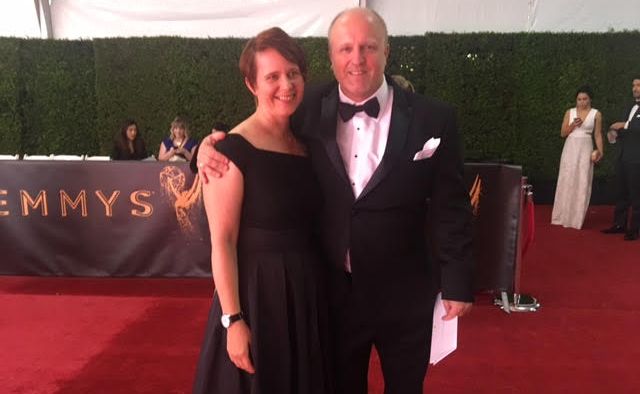 Q: Hi, Marc. First off, could you give our readers a bit of background on you and what your role in the Untitled John Hesp Project is?

Marc Ambrose:I am a British born producer, now living in Los Angeles, and I am a producer on the “Untitled Yorkshire To Vegas Poker Movie” with my producing partner Niall Perrett.

Q: Follow up to that, while trying not to sound too suspicious, is: are you and your team – or have you guys ever been – poker players?

MA:We have played internet poker a little and also have the lads around for poker nights sometimes. Poker nights are very quite popular in Hollywood entertainment industry per the Molly Bloom movie but I just like have a bit of fun.

Q: Did you see the original broadcasts with Hesp? Was that how you came across this story originally?

MA:I was at a hotel by the pool having a beer and saw John on the TV. The sound was down and all I could see what this happy man in a crazy jacket playing poker. We turned the sound up; it was such a fun uplifting story and John is so engaging I did some more research.

Q: What was it about the story that first got you excited about making it into a film?

MA:Like I said it’s a fun uplifting story and it’s not really about poker. Like The Full Monty isn’t about male strippers. It’s a fish out of water, feel good comedy.

Like The Full Monty there is – of course – drama, ups and downs, and twists and turns.

Q: Now that you have the inside scoop on Hesp as it were, can you tease some of the story that we might not have got from watching his appearances on TV?

MA:Well you probably know that John sells caravans in Bridlington, Yorkshire which is a little seaside town and that in itself is a great setting and it also has a working class feel to it. That is where the story will begin and Vegas is the complete opposite of Bridlington so that sets up comedy with the fish out of water aspect.

John has said the story almost tells itself, and we have a writer actually from Yorkshire writing the script now.

John has recorded hours of audio as he is writing a book based on the experience and we are working with Johns audio to get the little anecdotes.

I will give you one cool piece of info that I think is quite fascinating.

John started playing poker online in the 90’s when computers had dial up and people that are old enough to remember dial up internet it was really quite frustrating as it literally had to go through the phone line and was so slow and made a weird noise dialing up.

I think this is a great visual and quite incredible considering the same company that ran that online betting so many years ago are also sponsors in the WSOP IN Vegas that years later John when wins £2 million pound in.

Q: It’s funny that you mentioned The Full Monty, because my first thought when I saw there was a Hesp film in the works was: ‘Of course! They’re doing Slumdog Millionaire meets The Full Monty!’ What sort of film are we really in for?

MA:Definitely The Full Monty humor and tone. Slumdog Millionaire is a good one as well given the fish out of water and the money stakes. You are completely right.

Q: In the wake of Aaron Sorkin’s insistence that Molly’s Game was ‘not about poker’ in the publicity, what would you say this movie about poker is ‘really’ about?

MA:It’s a fish out of water, life is too short, but also the grass isn’t always greener story. It’s also has love story element between John and his wife.

And it also about luck and magic, as that is what you need in poker and life.

Q: What's your favourite poker movie at the moment?

MA:I really did like Molly’s Game and of course there are some great movies that revolve around gambling like The Hustler, The Gambler and of course the classic The Cincinnati Kid with the great Steve Mcqueen.

Q: There is a danger of poker simply being a bunch of guys sat around a table. While that’s less of a risk with a character like Hesp at the heart of the story but have you got a sense of how you’re approaching the poker scenes?

MA:A lot of the story will be the lead up to the final competition as we need to set up the stakes and story but  we have some great ideas to make it exciting.

The technology is so advanced now that there is a lot that you can do visually but to be honest if we are worried about the poker game at that point in the story we have bigger problems.

Q: With the caveat that movies have a notoriously difficult path to run between concept and release can you give us a rough idea of where the movie is and what else needs doing to bring it fruition?

MA: We have the amazing property which is John’s life and experiences and it seems obvious but we have to write a great script and those two will attract a director to jump on board.

But seriously we have had a lot of interest already and given the huge online businesses in the industry, there seems to be a lot of opportunities for financing.

Q: And last of all when will we be getting to see it?

We still have to work extremely hard to make that happen and like I said before just like in poker and life we’ll need a little luck and magic too.

The communities of poker players, MMA fans and weed proponents are mourning the loss of Elias Theodorou, who succumbed to colon cancer at the young age of 34