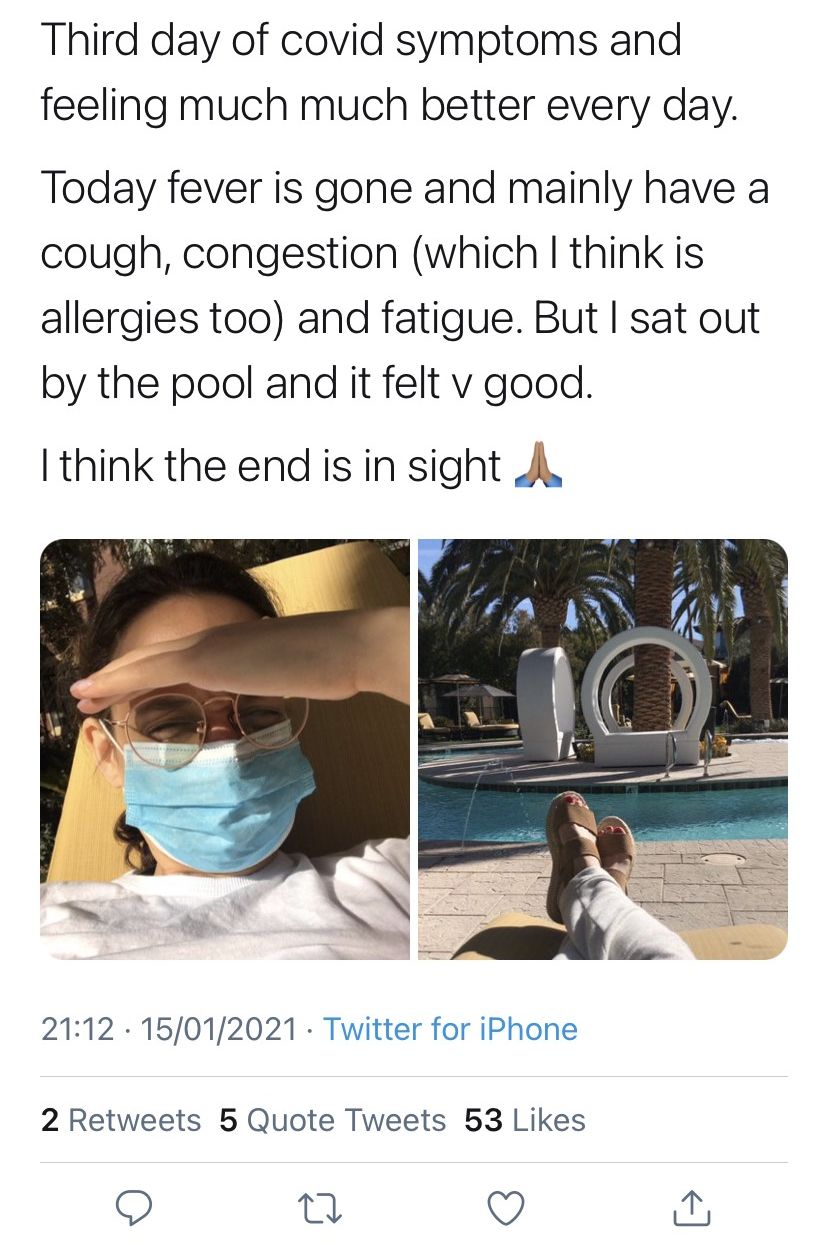 Doug Polk was one of the first to pull Cordeiro up for her selfish behaviour, telling the vlogger and co-host of The Rake podcast:

“Please don’t purposefully go into public areas where people could walk near you and get Covid. Just stay home until you are better.”

Even at this, Cordeiro refused to accept she was in the wrong, responding:

“It is good to walk outside for 20 min per day to get sunlight. I think doing due diligence making sure no-one’s around and wearing a mask for a few minutes outside is very reasonable.”

Cordeiro, who is engaged to English poker pro Benjamin ‘Spraggy’ Spragg, had tweeted earlier in the week that she had caught the novel coronavirus.

“So looks like I have covid. That’s it for me then. See you in the next life,” she wrote, adding later, “I do really have it but it seems mild so far - second day of symptoms today and I’m feeling better with just a cough and some aches and chills. I’m tough as a coffin nail don’t worry.”

It’s not clear where or how she caught the virus, but just over a week ago she had played at the Venetian in Vegas.

“If you go to Venetian poker room and come out alive, you’re a god. Place is crawling with covid. Also just being there makes you wanna shoot yourself in the face. Either way, you’re a goner.”

It wasn’t just Doug Polk who had issues with Cordeiro’s actions, a few of the replies below from poker pros and fans…

“IDK the situation in Nevada but breaking quarantine here is like...quite illegal? And that's not even requiring a confirmed positive case... I don't see hotels and apartments as any different; my condo (and I imagine any building that doesn't want to get sued for allowing spread) explicitly says not to use common areas even with mild symptoms. Aerosols linger in elevators, hallways, stairwells. It's just 10 days!”

Nevada has seen more than 250,000 recorded cases of COVID-19 and 3660 deaths attributed to the virus. The US total numbers are now over 23million confirmed cases and 390,000 deaths.

The poker world lost several players due to the COVID-19 virus, most notably Robert ‘”A-Game Rob” Gray, while three players from the same home game succumbed to illnesses related to the virus.

Cordeiro, who saw her solo lawsuit against Mike Postle thrown out last year, eventually responded to being called out for her irresponsible and potentially deadly behaviour.

“It’s never my intention to put anyone in danger. And I never would,” she tweeted.