Player Literally DRAGGED Out of the WSOP

Thrown out, ejected, sent packing, expelled, evicted – the thesaurus has a lot of words to describe it, but ‘dragged out’ doesn’t quite make the list! However, this is what happened to one player in the WSOP $1.1k Little One-for-One Drop this week after his drunken behavior got too much for tournament director Jack Effel.

Cory A. Cunningham had entered the baby version of the water-aid charity One-for-One Drop event, but evidently had a drop of the hard stuff too much which led to him berating another player who he felt was taking too much time over hands.

Usually calling the clock gets things sorted but Cunningham figured that screaming “Time! Time! Time!” was a better way of dealing with the situation, and telling security to “get the fuck away” didn’t help matters once things escalated.

Reports claim that he was also “ yelling at the dealer to show him what his opponent had but she put the cards into the muck,” a move which further incensed the unhappy fellow. The table was soon surrounded by security staff, players and bemused onlookers.

Fellow player Sam De Silva managed to capture some of the incident on camera, tweeting “Guy goes nuts at One drop” as his camera footage shows Cunningham being physically dragged away from the table!

What happened next wasn’t much prettier as Cunningham staged a bit of a sit-down protest in the hallway of the Rio Casino, shouting the bizarrely illogical, “Take me to jail! I can’t not play this tournament. You can’t kick me out,” as security and friends of the player finally persuaded him to leave the building.

Things then got a little weirder as TD Jack Effel reappeared and back-tracked on the initial decision to expel Cunningham not only from the event but also from future WSOP’s – a lifetime ban.

According to Pokerlistings.com, Effel told Cunningham:

Things got out of hand in there,” adding, “You got really loud. The good thing is that you didn’t hurt anyone, except for yourself. We’re gonna ask that you leave for the rest of the summer.”

Explaining that he wanted to end the WSOP on positive note, Effel said that he was willing to “refund Cunningham’s buy-in” and allow him back into the WSOP next year “so long as he co-operated and left quietly”.

“This is bullshit,” said the belligerent player although he finally agreed and eventually left with his friends. 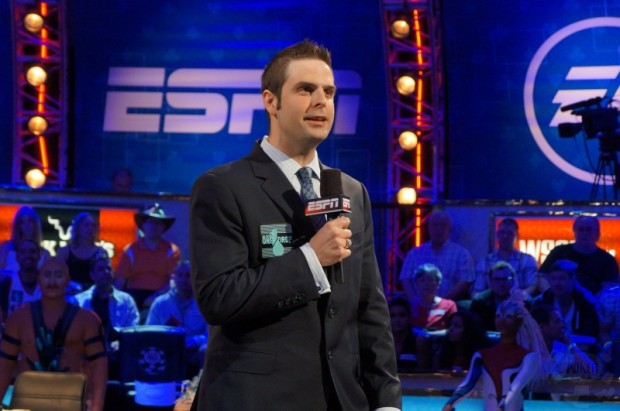 It’s not the first incident Effel and his team have had to deal with this year, nor is it the first time that an initial ‘lifetime ban’ has been quickly reduced with the serial card-ripper Jared Blesnick finding himself initially on the wrong end of Effel’s ire.

As I wrote a few weeks ago:

Blesnick, a well-known online high-stakes pro with a privileged but murky background, found out that there’s only so much that WSOP tournament director Jack Effel will put up with, and when he over-stepped the mark, he was thrown out of the event, the series and the Rio casino. Known on the virtual felt as ‘harrington25’, his online poker skills (primarily at PLO) are legendary. However, his live poker antics have upset a number of players over the years, and this week saw him lose the plot – and the pot – completely.”

As reported on the WSOP.com website, Blesnick was down to the final two tables of Event #34, the $1500 2-7 Triple Draw Lowball (Limit). With more than 120,000 in the pot after the second draw, Blesnick had a single 1,000 chip left behind. Andrey Zaichenko drew one card from the cutoff in the final draw, and Jared Blesnick drew one from the button.

Zaichenko looks over at Blesnick', reported the official site, 'and he says "I only have one thousand left, give me a payout ticket!" Zaichenko bets 1,000 and Blesnick fires his last chip into the pot. "Floor, give me a fucking payout ticket now," says Blesnick.

Zaichenko shows 10 6 5 4 2 for a ten low. Blesnick's first four cards are tabled in front of him 8 5 3 2. He stands up, lifts up his last draw card, and crumples it up in his hand, throwing it across the table. He then grabs the rest of his hand, and crumples them up as well, spiking them down on the table. Zaichenko quietly takes in the big pot, and Blesnick is escorted to the payout desk.

Eliminated in 14th place for $4,706, Blesnick was then apparently banned from the WSOP for life – having been warned on multiple occasions about his behavior. It quickly transpired though that Blesnick’s ‘ban’ was to last only a few days however.

So, what do readers think about these incidents? Are they worthy of lifetime bans? Fines? Would you expect a refund if you acted this way? Let us know in the comments section below!