Set Sail on the StreamBoat2 with Bill Perkins & Friends

If you like nice weather, beautiful scenery, poker and general degeneracy amongst good company, listen up. Bill Perkins is turning his luxury 55’ yacht into StreamBoat once again for September, where there will be lots of poker and lots of Twitch streaming going on. Accompanied by PokerStars pros Jaime Staples, Kevin Martin and Jeff Gross, along with Jaime’s younger brother Matt and some other famous names in poker, Bill is offering a few lucky winners to join the crew in the British Virgin Islands for a week in September.

To be in with a chance of winning, the streamers will be hosting freerolls between August 30th and September 3rd. Four of these will be held in the Home Games section of PokerStars – you can find the details for each of these freerolls below: 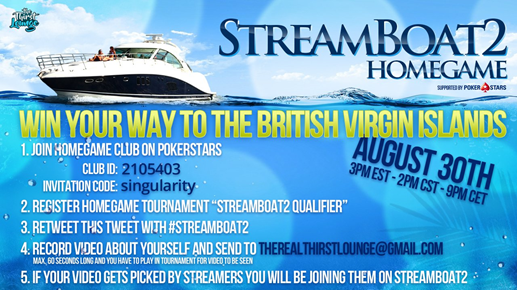 As the boat will be a filming and streaming hub, this competition has a twist. To be eligible to win a place on StreamBoat, you have to record a video about yourself and why you should be picked (no longer than 60 seconds) and send to therealthirstlounge@gmail.com. You have to finish in the top 12 of any of the above freerolls for your video to be considered. Bill and the streamers will be selecting winners from these videos – so you need to impress them in your video as well as at the poker table.

Along with these freerolls in the Home Games section of PokerStars, there will also be another freeroll on September 3rd in the main PokerStars client – just search ‘Streamboat’ in the tournament search function to find it. The details are below:

To get a ticket for this freeroll, you must deposit on PokerStars with the code ‘STREAMBOAT2’. Like the other tournaments, you’ll need to submit a video to the crew and finish in the top 12 to be in with a chance of winning. You’ll also win a Sunday Million ticket (with a value of $215) if you make it to the final two tables.

Winners will be announced on September 7th – make sure that you have an in-date travel document and are available from September 11th-17th. Your expenses will be paid for.