How to Get Banned at the WSOP

The rise of the robots in poker may be on its way in many spheres – AI and ‘robopros’ probably destined to solve and ruin the game in our lifetime – but there will always be enough room for emotions and human behaviour to shine, or as we will see here, cast a shadow, and since its WSOP time what better way to focus than to take a look at those who won’t be with us this summer…

Two years ago saw Jared Bleznick fall foul of the WSOP authorities, Bleznick’s scummy behaviour both live and online ending unceremoniously with a WSOP ban for ripping his cards up at the table - shouting, as the WSOP.com site reported:

"Floor, give me a fucking payout ticket now."

Well, we don’t know 100% who was behind the super-user account which floored Absolute Poker back in 2007, but if Daniel Negreanu had his way he’d probably ban him anyway, ‘KidPoker’ in 2015 naming a few who he feels should never ever be allowed to set foot in the WSOP - Russ Hamilton and Mansour Matloubi top of the list, and Scott Tom not far behind.

Those we do know about who have lifetime bans for being shitty people or doing shitty things include Thang Luu, who won back-to-back bracelets in the 2008 and 2009 World Series’.

Unhappy that a dealer was about to touch his cards, Luu reportedly ‘smashed the hand of the dealer shattering multiple bones in the dealer’s hand’ – and that was that. No more WSOP for Luu and fortunate he didn’t end up in jail for his assault. 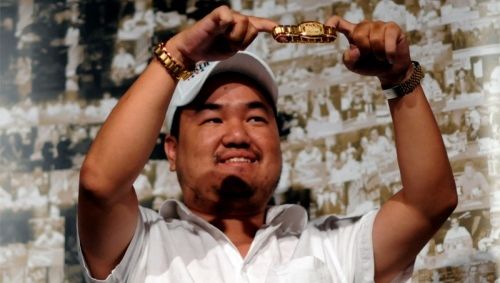 Bad behaviour doesn’t have to happen AT the WSOP to result in a ban from the summer series, as David Diaz discovered in 2013 when he had one or two too many, finding himself banned from all Harrahs [now Caesars] properties.

He tweeted at the time:

“Looks like I'm kicked out of all Harrahs property's …because I was so drunk and harassing ppl … but I don't remember any of this fml”.

…which along with Diaz’s heartfelt apology:

“I made a mistake and plan to do everything in my power to make it right and take the proper steps so that nothing like this will ever happen again" - resulted in the ban being lifted the following year.

Of course, a few bad apples out of the hundreds of thousands who have played the WSOP probably isn’t a bad ratio – but be warned if you’re going to Vegas, behave or be banned!