Poker pro Chase Bianchi has taken to Instagram to accuse Pokerclub.ag and its chief promoter Adnan Mohammed of running a ‘Ponzi-like business’ after discovering that the site doesn’t hold all the player funds, leading to slow or non-existent withdrawals.

For Brooklyn-pro Mohammed, who has some $230,000 in tournament cashes on Hendon Mob, it’s not the first time he has been called out over alleged scams, an entire Instagram page devoted to his dealings in the poker and wider gambling world, as well as at least two 2+2 poker forum threads detailing his ‘activities’ in poker and sportsbetting.

The latest in a long line of disputes involving self-styled ‘nypokerking’ Mohammed has seen Bianchi stating that withdrawals being processed only when a deposit is made by another player is:

“…a MASSIVE red flag that implies at worst they don't have player funds at all and are running a Ponzi-like business.”

Those behind the Pokerclub.ag site are unknown at the moment, although many believe that Adnan Mohammed himself is running the entire show.

One poster on 2+2 late last year responded to a sportsbettor who was having trouble getting paid by Mohammed, stating:

“If you couldn’t figure out that his imaginary friends platform was a scam then you deserve to lose the $287. This guy’s poker career has been funded by scamming, he can’t beat the games. He scammed someone else out of 3500 doing the same paypal bet rig. He will get his ass kicked soon.” 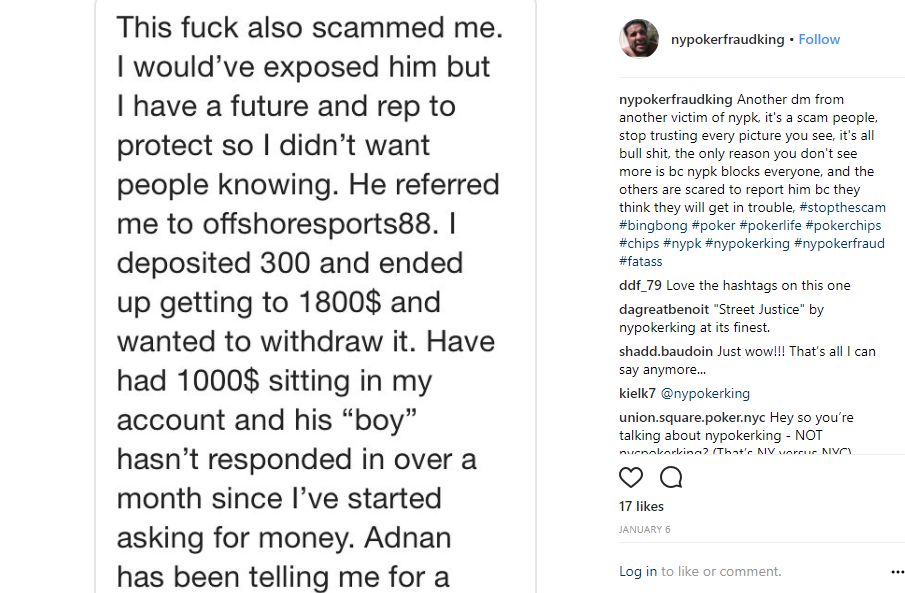 On today’s thread re: the Pokerclub.ag ‘Ponzi scheme’ claims, posters are already on the case, ‘markdirt’ writing: ‘This site is clearly not a safe or trustworthy place. If you choose to play here, accept the consequences when they inevitably arrive’, while ‘backdoorflush’ offered up the following: 'No auditing, no regulation, and no responsibility. What could possibly go wrong?” – answering his own question with the ‘spoiler reveal’… ‘Full Tilt’.

Bianchi later edited his post to add that he “spoke with Adnan on the phone” and was given explanations for the unusual withdrawal practices – Mohammed apparently stating that they “process smaller transactions by matching peer to peer to avoid PayPal and Venmo issues” - but Bianchi ends by saying:

Both Adnan Mohammed and Pokerclub.ag have been contacted for a response to these allegations.

Nypk isn't running a Ponzi scheme, he's scamming for sure, but that is not what the poker club is about, chase is a clueless clown, I don't even know why he bothered that, the app was created to circumvent existing gambling regulations, mostly from china, it's sent up like a home poker game and is raked, venmo, PayPal, all the money transfer apps will not knowingly support this, that is why they pay out the way they do, it's all shady, probably illegal, but not a Ponzi, eventually play will slow and that'll be, IMO, when nypk just takes all the deposited money and runs, his sports betting site that he claimed was his "bookie" was him and his brother/cousin/friend mix, a dot come search shows all of that, what people need to understand is nypk is a criminal, convicted of grand larceny, he then started this Instagram persona to gain people's trust and scam them, he's been doing it since day 1, on the first Instagram account I created I had text and e mail conversations sent to me by people nypk never paid, and I posted them, staking and bets, nypk started hustling people and it just progressed through trial and error, finally somewhere along the line he fig sports betting could bring him in some money, then he hit the jackpot, online poker home game where he can make money through rake, probably got scared of legal consequences and public ally distanced himself from running the game, but that's bs, nypk posted saying he needs to hire ppl and so on, his entire ig account is a collection of lies, if he ever responds ask him about being a finance CEO making over 250k a year, that was his first bs lie, he does have 3-4 companies in his name, registered to his mothers address, check out linkedin profile, every company listed has no revenue, how was he making money? All lies designed to get him credibility, and I just scratched the surface in this post @nypokerfraudking