Ever since Holz announced his retirement from poker after receiving his WSOP bracelet for winning the One Drop last year, he did anything but sit back and relax. Actually, even as a “recreational player”, he amassed so much in live tournament earnings that his post-retirement winnings alone would make him 110th on Hendon’s “All Time Money List”, ahead of some well-known names.

Fedor Holz shot to poker stardom in 2016, when he managed to score such great results like finishing second in the Aria Super High Roller Bowl, winning an event in the Triton Super High Roller Series, and - the biggest title of them all - winning the WSOP $111,111 One-Drop. While receiving his first and only bracelet, he announced he’s ready to move on to the next stage of his life, and  he is retiring from professional poker - at the ripe old age of 22, with over $20 million in tournament cashes to his name.

Since then, he tried his luck at many things - mostly focusing on his start-up mind coaching company, Primed. But we also saw him as a hoodie model for the Estonian clothing line Noëtics Hood along with Patrik Antonius.

The German cardplayer gave hosting a podcast a try as well, he has an hour-long interview with this year’s WSOP Main Event winner Scott Blumstein on his YouTube channel.

Collaboration between the two was nothing new, Blumstein wore the badge of Holz’s company, Primed on his shirt when he took down the most coveted title in poker.

While branching out, Fedor Holz never was able to break away from poker completely, however. In fact since he announced his retirement, he still cashed in 14 events, for $6.837 million total. His latest money finish comes from last month, he came in second in the Triton Macau Main Event, which earned him $2.1 million. 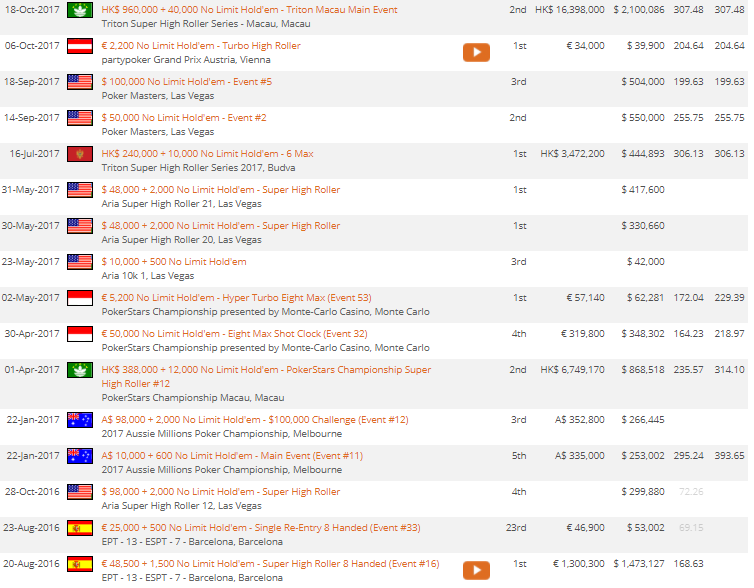 That would get him the impressive 110th place in the Hendon Database’s “All Time Money List” - ahead of some big names, like his fellow “hoodie salesman” Patrik Antonius ($6.799 million), the most recent addition to the Poker Hall of Fame, Dave “Devilfish” Ulliot ($6.218 million), popular Twitch-streamer Jason Somerville ($3.649 million), and one of the most famous female poker players, Maria Ho ($2.394 million).

Holz made it clear multiple times that while he still plans on playing some high roller tournaments, he does not want to rely on poker to make his living anymore - he compared himself to Bill Perkins in that regard. As a consequence, he almost completely disappeared from the online high stakes scene - HighStakesDB only tracked 790 hands CrownUpGuy played this year.